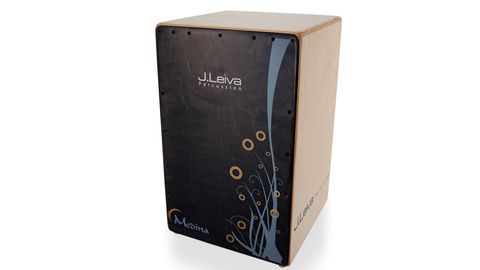 Though lacking in bass tones this cajon still sounds good but lends itself to being miked up with a slight tweaking in the eq department.

This Medina Pro review model has a natural birch ply body with a dusky brown tapa. It sports rubber feet, a bounty of familiar J Leiva graphics and is typically well- constructed. It is also superbly finished and feels smooth to the touch, but a poorly-sanded reinforcement block behind the sound hole is quite uncharacteristic.

Its job title could be slightly misleading as it doesn't actually 'tune' the cajon, instead it allows a degree of adjustment of the snare effect by altering the tension of the four guitar string-type wires against the rear of the tapa. Adjustment is made via winged bolts located towards the lower part of the rear panel, negating the use for an Allen key.

As on the Travel Series, the Medina also has a 6" circular cut-out for the sound hole located way down the rear panel of the instrument. The Medina doesn't have an internal support or 'sound post' built-in, instead it relies on the substantial birch plies of the cajon body for strength and rigidity.

With the lines of a smoothly rounded edged body, the Medina feels amazing to play. It seems quite natural becoming tactile with each and every slap as the palms glide effortlessly across the tapa's surface. Unless you were named John Bonham or Joe Morello, this experience is not available on a standard drum kit!

The sound produced around the topmost portion of the tapa is satisfyingly percussion-like - as delicate finger taps provide us with some of the smaller, tightly-tensioned percussion tones. Working those fingers and palms just a touch lower introduces congas, then, a little more, some snares.

Mid-point of the tapa, we would have expected to be greeted with some deepish tones, but, compared to a couple of cajons we have, this particular model lacks substance - in fact it is quite middly.

The DTS system is subtle and unless you are in a studio environment (where the cajon is isolated), in a live situation would be hardly noticeable. As you have to virtually dismount the cajon, it would help to have the controls at the top of the instrument - but we guess there could be some strange looks from members of the audience with all the fiddling around the rear end!