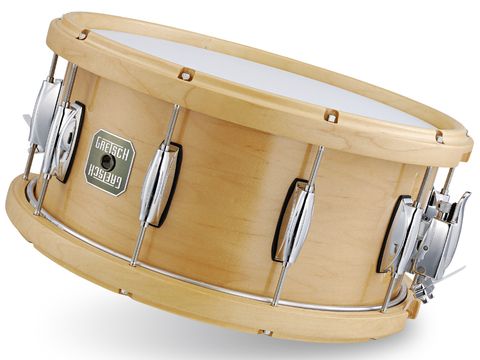 By the number of wooden-hooped snares currently in production (a surprising proportion of them having been commissioned or endorsed by serious players), such drums are clearly versatile enough for use as a main snare. This pair of Gretsch drums provides two more reasons to consider investing in an alternative to a metal-hooped snare.

Some of Gretsch's earliest drums from the late 19th century were made with wooden hoops, and the company continued manufacturing wooden-hooped marching snares until 1971. The hoops on drums of such vintage were thinner and taller than the examples seen here, and this type of wide hoop design has evolved relatively recently.

Both drums are built around 14"x6.5" 10-ply, all-maple shells, which appear elsewhere in the Full Range snare drum series, shod with conventional metal hoops. The shells are finished in a clear high gloss, which contrasts with the satin finish of the hoops. Inside, Gretsch's famous Silver Sealer coating has been applied, while the bearing edges are cut at the company's regular 30 degrees.

Ten double-ended lugs encircle each drum, and Evans heads are fitted as standard on both sides. The snare release is a chunky new Gretsch model, with a chrome-plated clasp that hinges away from the drum. Tension adjustments of the snare wires can be dialled in from both the snare release and the butt end, making it possible to place the wires dead centre of the head.

The wooden hoops are made from laminated strips of maple. Rather than being finished flat with a right-angled edge in the manner of many wooden-hoop drums, they have been shaped to fall away in a smooth curve. The profile is reminiscent of a regular metal hoop, though understandably wider.

Two cutaways with integrated slots are built into the resonant hoops at the points where the snare release and butt end are located. These allow for any movement of the snare release mechanism, and the unimpeded travel of the connecting strip on the snare wires. A single smaller notch for accessing the lever is recessed into the underside of the batter hoop above the snare release.

The single component that separates the drums is a metal insert glued into the batter hoop of the S-6514WMH-MPL model. It is 12mm deep and rises by a couple of millimetres above the edge of the wooden hoop in order to be engaged for rimshots and cross sticking. Wooden hoops make for a noticeable increase in the overall diameter of a drum, making each example here the best part of 16" wide.

When we played the snares in a kit setting it took me a moment to get used to having a larger drum in front of me. The small difference in construction between the snares instils them with different playing characteristics, at times subtle and at others obvious.

Both drums are capable of producing throaty, woody tones that line the pocket of any beat snugly. Their depth means that there is always plenty of body beneath the note, even when cranked up to biscuit tin tunings. This is evident when playing fills, where the power available keeps flowing.

The all-wooden drum is a fraction blunter in its response, so sounds a little fatter and more open. Any overtones it produces are more colourful in nature as well.

In contrast, the metal insert drum's woody punch is framed with a metallic glint. Here, the overtones have a cleaner, slightly more focused feel. Cross sticking the drum highlights this in particular, as the sound is harder and more urgent alongside the warmer and deeper response of its sister.

Variations in rimshot are discernible as well, with the all-wood model delivering a thicker clonk in comparison to its counterpart, which possesses more of a snappy ring. Brushes come up a treat on both drums, no doubt aided by the excellent Evans heads.