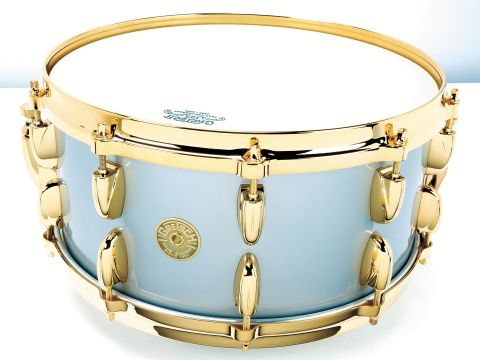 These are both fine tributes to Gretsch's great heritage and they perform well, but the fact is that these drums are more than likely to end up as collectors' items.

The Gretsch company dates back to 1883, which made 2008 its 125th anniversary year. To mark the occasion, the company sent us a brace of snare drums, each bearing a 125th anniversary silk-screened decal. They also have the famous round badge, the distinguishing label of Gretsch drums from the '30s to the end of the '60s.

Gretsch undoubtedly holds a special reverence in drum-lore. Gretsch drums - the kicks and toms at least - were top of the pile for a long time when it came to recording. Gretsch snares, however, never quite garnered the love of other classic Americans.

Ludwig had its Supraphonics, Slingerland its Radio King, Rogers its DynaSonic. Even Charlie Watts, who's played the same Gretsch kit on stage for decades, doesn't normally couple it with a Gretsch snare. So how will these two commemorative models shape up?

Each drum is one of only 125 (maximum) to be built in Gretsch's USA Custom Shop and comes with a'60s vintage orange and white interior label, plus a certificate of authenticity, stating the serial number and the date built. It's also signed by the current Fred Gretsch, descendant of the company's founder.

Both drums have six-ply, straight sided (no reinforcement rings), 7 1/2mm thick North American maple shells. They're sealed - as always - on the inside with a thin silver paint. The bearing edges are a gently curved 30 degrees to the outer radius rather than the sharper 45 degrees of most drums. The edges are flat and accurate.

The other characteristic feature is the die-cast hoops. The 14"x5 1/2" drum has eight post lugs, as seen on Gretsch's New Classic series. The 14"x6 1/2" has 20 single-ended small rocket lugs. The shallower drum is finished in Antique Curly Maple, a deep brown-stained, figured veneer. Offset by the brilliant chrome plate, this is a great looker. The deeper drum is Silver Mist - a translucent off-white with gold plated fittings, including the snare wires and tuning key.

As commemorative drums, both are fitted appropriately with Gretsch's vintage Lightning strainer This is a beautiful bit of kit and aesthetically, the radial-arm pull-away design is both sensuous and elegant. That being said, its functionality will not be to everyone's liking and, tellingly, Gretsch offers modern Dunnett or Nickelworks strainers as factory fitted options on its standard top-line snares.

Then again, we see Vinnie Colaiuta prefers Lightnings on his signature snares and if they work for him…

Unlike most other strainers, the Lightning has the throw-off lever on one side while the tension strainer knob is on the other. It's smooth, with small rubber stoppers for silent action, although it feels slightly precarious - as if it could drop down, releasing the snares under the assault of heavy modern playing. The hefty butt end is less elegant, but it's easier to turn the tension knob when there's no strainer lever in the way.

Separating the two functions is not a bad idea. Yes it occupies both your hands, but is that really a problem?

One area where the design could do with updating is in the fastening of the snare straps. One drum arrived with the snares misaligned and it took some fiddling to get them squared up and centred. The straps go behind the plates at each end and slipping them into the slots is quite tricky. Still, given the gently dipping snare beds, getting the standard Gretsch 20-strand steel snares to lie flat was easy thereafter.

The other Gretsch feature that divides drummers is the die-cast hoops. Gretsch's are the original and most beautiful, but they're extra deep, which means your rim shots have an oh-so-slightly raised angle. It's great for traditional grip jazzers looking for a lively, clanking, even brittle, accent. Die-casts also make the sound a touch harder and more compact and the response of both these drums right near the edges was dry, not snarey.

This might also be due to the slight warming and softening effect of the relatively shallow 30degree edges. Striking more centrally, the sound really opens up to a satisfying bright and full tone. Playing open rolls with rim shots, the overall vibe is crisp and dazzling. Plus you really notice the resonance of the shell. Boy, do you notice it - you may need a bit of top-head damping to control it on occasion.

We expected the bigger drum, with far more lugs, to be less open and resonant, but we didn't find that in practice. They both tuned high or low with good results - a definite plus of the heavy rims.