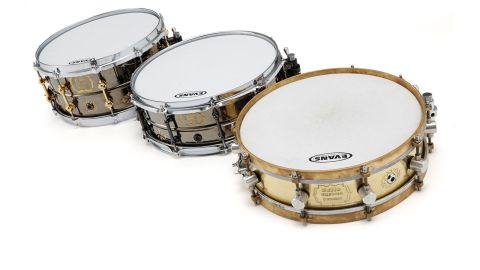 In the four years since Echo Custom Drums first came on to Rhythm's radar, the father and son company has made impressive strides in the drum world. We've seen Echo's gorgeous Apollo kits, snare drums galore and the mouth-watering brass kit which earned a rave review on these very pages earlier this year.

It's not just Rhythm that has been impressed by Echo either, players such as Elbow's Richard Jupp and theatre ace/Leo Sayer sticksman Elliott Henshaw have also been taken by the Cheshire company's wares. And this month we're treated to more of the Quinn family's handiwork, thanks to a brace of black nickel snare drums and a full-on brass snare.

Up for review today we have two 1.2mm black nickel over brass snares forged with a single vertical seam, and a 1.2mm solid brass drum. The 45° spun bearing edges found on the black nickel over brass drums are beautifully smooth, and boy do those outside shells look stunning. Both feature a single centre bead which runs the entire circumference of the drums, while the engraved 3D diamonds that pepper the shell add a touch of class.

We take this trio of snares into our band's weekly rehearsal session and challenge them with a set of rock staples. We set the 14"x4" drum up as a side snare and plump for the 14"x7" as our main snare, and the latter quickly shows itself to be an absolute beast.

A shot to the heart of the drum sees a deep, guttural growl. It's a bowel shaker, perfect for hard rock and certainly not one for a backroom jazz gig. Its go-to sound is a rich rip-roarer, full of body and incredibly loud when given some right old welly. Having said that, cross sticks are swallowed up with surprising articulation, but even these carry frightening volume.

As you'd expect from a snare of such girth, it is something of stick chewer. So, while rim shots are suitably deafening, they'll smash your 5As to bits in minutes. It doesn't help that the drum almost encourages you to play harder - this just doesn't seem to be a snare that's happy to be played delicately.

When tuned up we're still hit with a deep, throaty sound, and at mid-tuning we're able to find a beautiful timbre that powers through our set with relative ease. The 14"x4" is the perfect choice for our secondary snare, packing a beautiful ping and a quick-to-diminish tone on each well-placed shot.

Switching the 14"x7" out in favour of the 14"x51⁄2", the differences are subtle, but ever so slightly noticeable. Volume is still king, but this smaller drum has a little more tonal control than its big brother. There's also a more refined crack and this snare will be seen as more of an all-rounder.

A sturdy smack to the centre of the drum still produces an authoritative thud that will stop you in your tracks, but there's also a little more high-end attainable when we crank things up. Rim-shots, however, are just as unforgiving, so keep a steady supply of sticks to hand if you're of the mindset that every shot should be a rim shot.

And now on to the dreaded price point. Given their stellar performance you might expect a premium price range to match, and you'd be right. Although, given the level of craftsmanship on display here, £670 for the 14"x7", £545 for the 14"x51⁄2" and £450 for the brass drum is not bad going at all, once you remember that you are paying for a custom crafted quality piece created here in the UK.