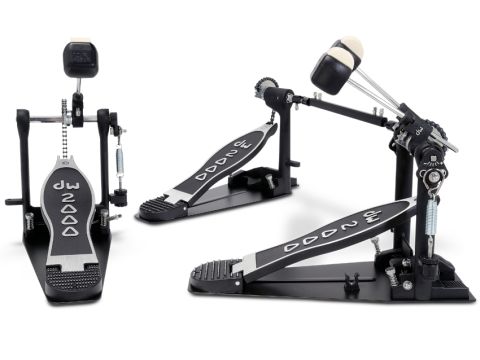 DW's pro pedals are among the best in the world and are the choice of countless name drummers, including a number of high-profile players who endorse rival drums but not the pedals. The 2000's real USP is the fact that they are unmistakably DW pedals and, as such, are impossible to confuse with anything else.

DW's pedal expertise goes back to its earliest days as a manufacturer. Back in 1977, the company's second ever product was its now legendary 5000 Series pedal. Over the years DW has introduced many more pedal ranges, mostly offering enhanced design and ever increased durability.

Taking the brand into less ventured territory is the new 2000 Series of pedals - an entry level range that claims to offer DW quality at more than reasonable prices.

The introduction of the 2000 Series pedals coincides with a rationalisation of DW's hardware lines. Pedals now begin with the 2000 Series and then climb through 3000, 5000, 6000 and 8000 ranges before reaching the pinnacle of the 9000 Series.

Before this reshuffle, ranges such as the now discontinued 4000 and 7000 Series made the graduations between pedals less obvious. But DW say that there is more to the 2000s than a simple re-badging exercise.

Single and double versions of the pedal are available, though not a left-sided double model. For obvious cost reasons 2000s are made in Taiwan (as indeed are a fair few of DW's pedals), but have to pass a strict quality control test before being shipped.

Tracing the lineage of any DW pedal back to the first 5000 from over three decades ago is not difficult. DW's original design has proved so enduring that, while the company's premium pedals have bulked out, their lines have deviated little from the original concept.

Being budget pedals, the 2000 models are slender in build and so bear an even more striking resemblance to the first 5000s. This design heritage is immediately apparent in the classic DW ovalised footplate bearing the DW logo and triangulated 0s of the series number. Similarly, the standard DW 101 dual-faced beater gives a choice of playing surfaces while also hitting the right visual note.

Beneath the footplate is a steel baseplate fitted with Velcro strips and retractable spikes. With the exception of the retro-chic 6000 Series pedals, all DW pedals share the same stabilising feature. The bearing spring rocker assembly - described by DW as being similar to that found on its high-end pedals - has a scale printed on the side for judging the angle of the action.

Adjusting the rake of the beater moves the footboard up or down by an equivalent amount. The footboard angle can also be altered independently by moving the chain's fixing point along a series of seven evenly-spaced holes on the cam. Based on the Accelerator AD3 drive found on 5000 Series pedals, the cam is designed for both speed and sensitivity.

Not all of the elements of higher range DW pedals make it onto the 2000s, with the Delta Ball Bearing Hinge being among the omissions. Cost alone prohibited its inclusion and instead the footplates are pinned to the heelplates.

Undoubtedly the most impressive feature that has been drawn down is the single post casting of the slave side of the double version of the pedal. A DW patent, the design allows for quick movement between the hi-hat and pedal and adds a look of purpose that is hard to beat.

Attaching the pedals to a bass drum was straightforward as an offset hoop clamp means that they can be tightened on without having to reach under the footplate. Once underfoot, the pedals gave a smooth and fluid action. I'm not keen on a huge amount of resistance in a pedal, and the 2000s were easy to set up to my preference. Such fleet-footedness was achieved in near silence too, with little in the way of operating noise.

Dialling more tension into the spring brought about a firmer feel without any loss in speed or feel. The double pedal was equally quick to respond and both sides felt in balance. Overall the pedals were positive to play; it's fair to say that they didn't feel like the most heavy duty pedals out there, but given their pricepoint that's no great surprise.