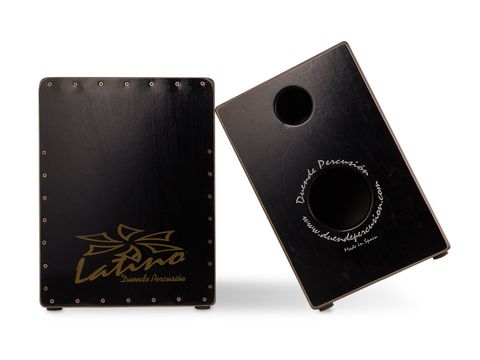 With so many mid- to top-range models on the market you do owe it to yourself to try before you commit, as the sound and feel varies greatly. These professional-level Duende models aren't cheap, but considering the sound and build quality, the two-year warranties and included gig bags, they do offer the serious player a great deal.

The cajon has become highly popular on the world's stages over the last few years thanks to its portability and versatility in a great many musical styles. It's also an intuitive instrument that pretty much anyone can quickly get into.

Family-run company Duende is based in Seville and started off initially just supplying the Spanish market. Now Duende also has an international presence with new and interesting updates on traditional designs.

First off we take a look at the top-level Duende Duo cajon, which is truly revolutionary in its design. Beautifully constructed entirely from birch, its reasonably compact size (46cm x 30cm x 34.5cm) shouldn't be sniffed at.

The drum's name derives from its innovative and isolated twin sound chambers that separate the bass and treble via two sound holes at the rear. The bass hole is considerably larger than the treble hole above it and what initially struck us was just how sturdy it is when compared to many other models.

There are two V-shaped sets of guitar strings behind the front plate, and these are adjustable via two screws at the base of the cajon. The seat has a lovely integrated non-slip finish, which will certainly help you from disappearing off the drum if you do play with it tilted back.

Secondly we have their Latino model, which is also a pro-quality instrument and, like the Duo, birch throughout with a 2.5mm front plate and 8mm surround. It has the same V-string dual internal snare system but is much wider than the Duo at 46cm x 35cm x 31.5cm.

Both models also come complete with their own padded carrying case.

The Duo is phenomenally responsive and its separate chambers really focus the tones produced. The bass tones are rich and surprisingly sonorous given the size and the highs come over beautifully well in perfect sympathy to the bass. Acoustically this cajon sounds gorgeous, but with even the slightest amplification (with a microphone near each sound hole) you'll be glad you made this choice.

The Latino is acoustically much louder and the sound plate much more flexible due to its size. As you might expect, the bass tones seemed to be emphasised and it sounded huge when amplified. The Latino would certainly be a great choice for louder singer/ songwriter acoustic settings.