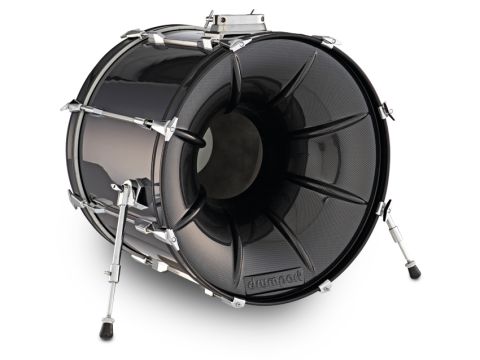 The Drumport looks great and undeniably sounds impressive - give it a try.

The radical eye- and ear-catching Drumport is designed to fit directly into a bass drum in place of the front (resonant) drum head.

It is held in position by bog-standard tuning components (from your own kit), without any modifications or specialist tools required - just a standard drum key. Its conical shape is reminiscent of a massive loudspeaker or the huge horn found on those ancient gramophones which, not coincidentally, also has the job of spreading and projecting the sound.

The Drumport (not to be confused with other bass drum sound-enhancing products such as the KickPort or O's), is the brainchild of drummer/designer Kirk Laker. According to Kirk, the Drumport was designed "to regenerate the sonic and subsonic waves that emanate from the bass drum batter head". This, says Kirk, "results in a thicker, fuller, drum sound".

His idea came from a desire to "push the bass drum sound further and to a wider spread in small to medium venues" - which are exactly the sort of gigs that most of us play.

From the initial concept to the final product (even with the aid of complex computer modelling), it has taken over four years to develop. Currently though, the only size available is the 22" version. However, a 20" model is soon to be available and, though still in the later development stages, a port for the toms isn't too far away.

The Drumport comes in a wide choice of colours and finishes, including Black, Red, White, Carbon Fibre, Green and Clear, with a slight price increase for the Carbon Fibre and Clear models. Should a user decide to do a custom paint job, Drumport say it is best to contact them first, to ensure the type of paint will be compatible with the plastic material.

The Drumport is constructed from a single piece (1mm thick approx.) of plastic that's formed by an injection moulding process. Sized to fit a 22" bass drum, the device measures a little over 22" in diameter with the smallest portion being a 20cm circular hole sited at the centre and aligning with the bass drum beater.

This is the rear of the cone, which sits approximately 20cm away from the beater, allowing the sound to emanate. Of course, depending on the depth of your bass drum, this distance will either be more or less.

Around the outer perimeter of the Drumport, to the outer edge is a flat flange designed to butt directly up against the bass drum counter hoop. Following the curved profile are ribbed sections, giving it additional strength and rigidity and helping to give it a pretty mean look too.

Installing the Drumport is quick and incredibly easy - it's as simple as swapping over a drum head and there's no front-head tuning involved either. Once the port is placed snugly in position over the bearing edge, the counter-hoop, claws and tuning bolts can each be attached.

It then takes just a couple of drum-key turns, past the finger-tight stage, for the port to be fixed firmly in position and the drum is ready to play. It is surprising just how rigid this fairly thin plastic cone becomes under just the smallest amount of tension. To us, the biggest surprise is just how stunning it looks in the drum - it appears as if the bass drum has been away for some judicious pimping.

Sat behind the kit, in the usual playing position, the bass drum does seem to lack the prized low-end grunt. However, from round the front the drum sounds thicker, and, considering there is so little dampening (from on the batter head itself), it's surprisingly dry.

Though there is a demonstrable mass of attack, detectable with each strike of the beater, it still seems a tad too middly. Slackening off the head slightly and placing a little dampening directly up against the head manages a much warmer sound while maintaining its punch and notable levels of projection.