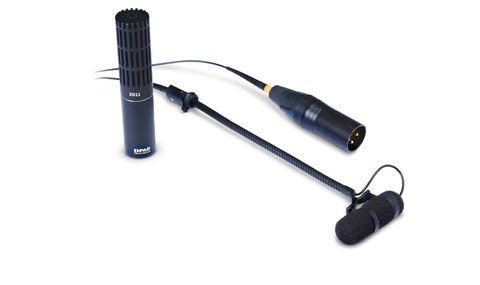 While these mics are undoubtedly small in stature, their performance is truly professional and the above average prices are more than justified by the quality of sound on offer.

DPA (short for Danish Professional Audio) was originally affiliated with Denmark-based acoustics company Brüel & Kjaer, but has been a standalone brand for over a decade.

On review is a pair of condenser drum microphones, both of which are at the upper end of mid-pricing but claim a level of performance comparable to big-budget mics.

DPA is a major player in sound reinforcement for theatre and television work. In these environments, miniaturisation is common so it's no surprise to find the review mics are on the compact side. The two mics supplied are the d:vote 4099 (£420) and the MMC2011 mic capsule (£360), complete with MMP-C preamp.

The d:vote 4099 comes with a gooseneck mount and clip assembly. DPA reckons it's versatile enough to mic any component of a drumkit; it's equally at home trained on a percussion rig and - according to DPA - practically any other instrument you could name.

The MMC2011 is part of DPA's d:dicate recording series of microphones. The range includes both complete mics and, as here, individual mic capsules that can be married to a choice of preamps.

Separating the mic capsules and preamps creates a modular system that offers more mic choices, covering a range of recording situations. The MMC2011's capsule contains two diaphragms, making it both sensitive and well-balanced while remaining remarkably diminutive. In keeping with this theme, DPA sent the smallest of three available preamps, the MMP-C (£282).

We initially tried out the mics at a gig, where they provided a strong signal without peaking and gave no feedback issues. The quality of the sound was clearly high but the time-short melee of a live mix combined with less than perfect acoustics of the venue (plus being behind the drums rather than out front listening) meant we didn't get to really hear the mic's finer points.

Fortunately we managed to blag some free time at a local studio and a few days later took a full kit in for a morning session. After only a few minutes, the sound engineer Darren called Rhythm into the control room for a listen.

We assumed he was going to tell us to tighten up (it was a little early in the day for your correspondent), but while the playing was undeniably sloppy the sound of the drums left little room for criticism. With the d:vote 4099 clamped to the bass drum (not even on a remote stand isolated from vibrations) the bass drum sound was as full, punchy and deep as you'd expect.

Quite how a mic smaller than the average adult's thumb is capable of capturing such low frequencies is beyond the wit of this drummer, but the sound it produced was spot on. One of DPA's more recent endorsees is Lars Ulrich, who is currently miking his entire kit with individual 4099s. And if it's good enough for the greatest living Dane's kit, well...

Impressive though the bass drum sound was, the MMC2011/MMP-C combo positioned over the snare came close to eclipsing it for sheer presence and fidelity. Every single facet of the snare was reproduced faultlessly, from the most delicate wisp of brushwork to a clouting backbeat, with all the nuances in between falling into place.

Not only was the sound faithful, but the clarity on offer was simply astonishing. The snare seemed to sparkle in the mix, like a glossy topcoat providing the final sheen - and without Darren having to trouble the EQ pots. The cross sticking sound the mic delivered was also so sharp and authentic it was hard to believe it wasn't a triggered sound.

More experimentation ensued and, by moving the MMC2011/MMP-C to a more overhead position (leaving the d:vote 4099 covering the bass drum), we thought we'd attempt to record the entire kit with just the two mics.

To our surprise, the mics not only captured all of the individual drums and cymbals but did so with remarkable precision and intimacy. The results exceeded demo standards and would be acceptable much further up the recording process, proving DPA is definitely a brand worth investigating by studio-bound musicians and sound engineers alike.