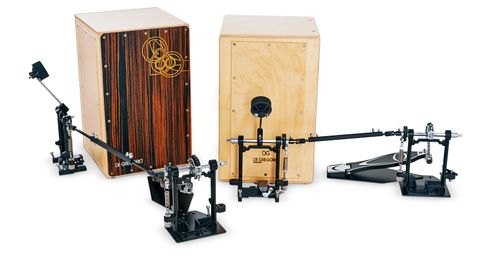 These cajons sound superb and, with the added bonus of the cajon pedal, are really excellent to play.

Spanish manufacturer DG De Gregorio Percussion has rapidly built a reputation for making cajons to a high standard. The company was formed by top Spanish/Italian percussionist Paolo DeGregorio who has used his passion to become the foremost producer of this highly-portable Peruvian box.

We have two DG cajons for review - the DrumBox and the DrumBox Travel Set. Apart from a set of intriguing winged bolts protruding from the rear of the Travel Set, there's very little to differentiate them. They each have similar dimensions and shape, and sport the familiar sound hole cut into the rear panel.

The shells of both instruments are constructed from five plies of premium, ecologically sourced birch and finished in a natural, water-based varnish. To the front, the tapas are made from plies of Baltic birch, topped with a vertical veneer of dark-grained Alpilignum and imprinted with the DG logo.

Bolted to one side of the cajons is a secondary tapa, also made from thin plies of birch. This is designed to be struck with the beater from DG's patented Direct-Drive Cajon Pedal, included with both cajons.

This has a soft beater that strikes the side tapa, offering an extra rhythmic lilt. 'Direct-Drive' refers to the linkage (similar to those found on double pedals) connecting the foot pedal to a remote beater, and not to the chain of the beater pedal.

The beater section attaches to the cajon via a specially designed clamp that slots in between two of the rubber feet under the base. For the 'snare', this comprises two pairs of vertically strung steel wires with adjustable Velcro strips. The strips apply varying degrees of pressure against the tapa, and two Allen bolts provide the adjustable tension to the wires.

DG has also provided a non-slip mat for the pedals and cajon to sit on, a large keyhole- shaped piece of material similar to the backing on carpets.

When describing a cajon, words like 'innovative' and 'ingenious' rarely occupy the same sentence. However, the DrumBox Travel Set is of both those things. Based on DG's flagship Maestral, the Travel Set features a replaceable, tuneable tapa and a fully removable rear panel.

With this panel removed, the cajon is transformed into storage box for the whole of the pedal assembly and anti-slip mat which is useful for storage during inter-gig transit.

The pedal clamp bracket is swiftly attached to the underside of the cajon together with the beater assembly. This padded beater is aligned so it sits approximately two-thirds of the way up the side tapa and centred between the two sides.

The drive shaft allows optimal positioning of the pedal and sitting there seems wholly natural. As we play we begin to develop some interesting rhythmic patterns that are not feasible or remotely possible with just a pair of hands. Samba, beguine, mambo, rumba... all we need now is a foot-operated clave for some five-stroke clave patterns and we're well away!

The cajon produces a deep, low resonating tone when struck just a few inches down the tapa. This helps avoid leaning or bending into an agonising angle in order to achieve that bass drum-like sound.

Knowing the location of the snare wires proves an advantage as we get used to all the sounds available around the cajons. There is a more pronounced rattle effect a third of the way in from either side, and then by placing our hands a few millimetres away from the 'snares' we hear bongos and down a tad into conga territory.

Striking in the centre two-thirds of the way up, we are treated to a rich deep tone and in contrast some strikingly good kit and percussive emulation takes place.

It is surprising the amount of low-end resonance lost when we experiment by removing the back of the Travel Set cajon, and such is the precise routing of that rear plate that, when back in position, there seems no discernible difference between either model.

As cajons go it has to be said that these are very expensive, but oddly there has to be much more work involved in producing the Travel Set, so paying just an additional £26 to get the extra storage convenience makes this model far better value.