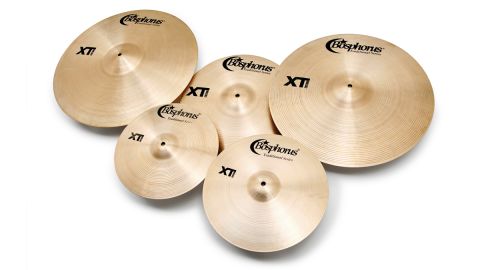 The Bosphorus XT Edition cymbals show that sometimes it pays to listen to professionals.

Turkish cymbalsmithery is going through a halcyon age; for years, the cymbal market was dominated by the big companies who, whilst still innovating, were appealing to the mass market.

Over the last decade, however, the traditional Turkish cymbal companies have taken the best characteristics of the Western companies' products, such as increased durability and more contemporary voicings, and married them to established hand-hammering techniques to come up with something new.

Bosphorus has been at the vanguard of taking modern influences and incorporating them into its traditionally-made range of cymbals. Its recent offerings include the Black Pearl, Master Vintage and Samba series which, when taken with the Bosphorus Traditional range, provides a broad-ranged tonal palette, much of which caters to the more esoteric (ie: jazz) end of the spectrum.

However, there's always room for new ideas, and a recent collaboration between Bosphorus and UK drummer Rob Brian has led to the company incorporating Rob's ideas for a fresh take on an established classic.

Rob's work covers a broad church of musical styles, which can mean he's playing rock one minute, jazz the next. Rob told Bosphorus he "was looking for a sound that's brighter and crisper, but using cymbals that I could add on to my 'Traditional' range that I've already got".

He tells us, "The idea with these cymbals is that the bell is a lot larger, and the body of the cymbal has more of a contour to it, which makes for a very immediate and bright response. They're good for jazz, and rock; any style of music, really."

The XT Edition cymbal range features 20" and 22" ride cymbals, 16" and 18" crashes, and 13" and 14" hi-hats. Rob says: "I selected a range of sizes because in my experience of working in the studio, these are the sizes that work best."

All of the cymbals feature a brilliant finish with broad lathing across the bow and bell, and fall somewhere between a medium and thin weight. Traditional Turkish cymbals often have a flattish bell, but the XTs feature a more pronounced bell.

Rob notes that the bow has a deeper curve from bell to edge, which is designed to give the response and feel of a thinner cymbal but the clarity and cut of a heavier-weight one.

Rob's preferred sizes cover the most popular sizes in the market, so we set up the 13" hi-hats, 16" crash and 20" ride to start with. The 13" hats are relatively high-pitched and, despite being a medium-thin weight, cut through well.

The half-open sound is a bright sizzle, and the smaller size makes fast pedalling patterns easy. The larger 14" hi-hats have a darker tone but still cut through. The larger diameter doesn't translate into heavier pedal feel but gives a clearer closed stick tone and more strident open note. Rob made a few changes to the hi-hat design, making the bottom bell a lot heavier.

The 20" gives a full, rounded sound that's darker than the equivalent mainstream model but retains Bosphorus' signature complex tones. The tighter bow curve gives a bright stick response but it opens
up quickly under heavy sticking into a fulsome warm wash that is easily controlled. The bell responds well to strikes with the shank of the stick, cutting through.

The 22" ride is darker and more like a straightforward jazz ride. That's not to say it's not capable of fulfilling Rob's brief, but it offers more complexity than the 20" and its larger diameter gives more edge wobble, but it never gets away from you unless you want it to - in fact, provoking it is difficult and requires forceful sticking across the rim.

Rob says,"For the rides, as well as a fast and clear stick response, I want a lot of wash in the cymbal, so I can get a lot of dynamics from it."

The 16" crash is bright and full with an immediate attack and slightly brassy overtones - it works well as an accent cymbal but gets slightly lost under heavy and repeated sticking.

The 18" crash is perhaps the pick of the bunch, and the most versatile - a full swelling crash loses the brassy overtones of the 16" but retains its quick articulation and builds on it to a full crescendo when crash-riding. It also does double-duty as a light ride under soft sticking, increasing its appeal.

Together the cymbals complement each other, the pitch of 16" allowing fast accents, while the 18" surges under heavy sticking to a full wall of noise that is surprisingly easy to control.