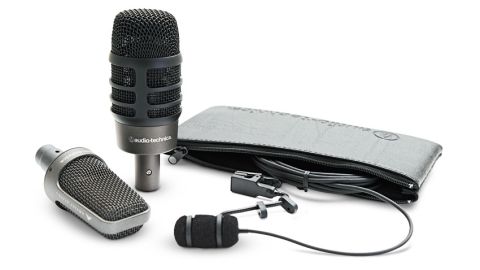 Whether recording or working in a live environment, these mics are suited to both. There are cheaper options available from Audio-Technica but these review models are worth the extra expenditure.

Audio giant Audio-Technica (who has recently celebrated its 50th anniversary) initially began manufacturing phono cartridges for a number of companies, before applying its expertise to a range of its own quality audio products.

It continues to produce a comprehensive range of audio equipment for the home, business, semi-professional and professional markets with products which include headphones, USB turntables and microphones. We have three Audio-Technica microphones for review (price quoted is for all three); two are from Audio-Technica's Artist Series, while the other model is from its Artist Elite series.

Of the three review models, the largest here is the dual-element ATM250DE, designed for the kick drum - this features two microphone capsules (a dynamic and a condenser), encased in a single body. Often when two mics are in close proximity, they can suffer from 'phase cancellation' - this can cause a thinning of the sound and sometimes an audible swishing noise.

Fortunately, the electronics within the mic and the angle of the capsules, (said to be in "perfect phase"), helps eliminate this problem. On the mic body there are two switches for the condenser portion - one is a 10dB pad, reducing the output and cutting the risk of overloading the capsule with the likely-high sound pressure level (SPL).

The other switch is a low-cut filter or bass roll-off - when this switch is aligned to the 'straight' line (printed on the mic body), the filter is off - when switched to the 'bent' line, filtering is enabled.

Audio-Technica supply a special 'Y' type lead with a five pin XLR plug at the mic end and two male XLRs at the other. Both of these plugs are clearly labelled and colour coded for the two mic sources - red for dynamic and blue for condenser.

The other two mics are purely condenser models - with the AE3000 (aimed at toms or snare) featuring a switchable low-cut and a -10dB pad with an integral 3-pin XLRM socket within its robust metal casing.

The other model is the ATM350 (suitable for snare or toms). It is a unique microphone, which is designed to be unobtrusive and able to fit into the tightest of spaces. This has a foam- protected capsule at the end of a flexi-mount which attaches to the drum (or other instrument) via its strong-sprung crocodile clip.

The microphone cable is permanently attached but has a three-pin plug to connect to its separate power module. This comes with the now familiar low-cut filter switch, houses the mic electronics and is fitted with an XLRM socket.

Before taking the mics out in a live environment, we conducted a few individual test recordings - the results were impressive with some great sounds on the snare and in particular the kick. We also recorded some cymbals with the low-cut filter set to 'enable' again - the results here were equally impressive.

Once we felt fully acquainted with each mic, it was time to go out on the road for a live gig. The kit was 'reinforced' using a compact but powerful RCF PA with a sub and a 12" cab sited to either side of the stage.

The PA is used exclusively for vocals and the all-important drums, while the bass guitar and lead/rhythm guitar had their own back-line set-up. As it's a live gig, we can't run around swapping and changing mic positions, so we make the decision to position the ATM250DE directly inside the kick about four inches away from the batter head and directly opposite the beater itself.

At the risk of overloading its condenser portion, we have applied the pad switch. The AE3000 is positioned an inch or so from the head on the small 12" tom (an SM57 is used on the floor tom), and the ATM350 is firmly clipped onto the rim of our snare.

Bearing in mind we haven't used these out live before, it only took a few minutes to get a decent overall kit sound which is also well-balanced and striking. The kick is incredibly punchy and unusually focused too - we don't think we have ever heard our kick sound so good!

The snare is (considering the tiny mic capsule) unexpectedly beefy but it also offers clarity and detailing from every striking position on the drum. Even with very little adjustment of the EQ (to cope with the odd shaped venue), it's possible to hear every stick strike on the 12" tom followed by a deep low-end resonance which quickly tails cleanly away.