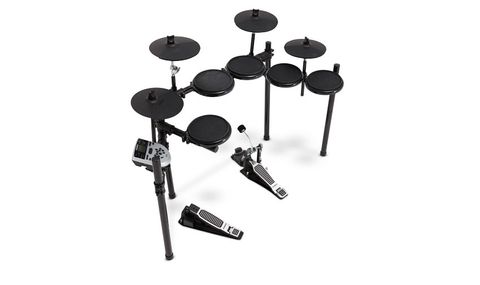 The kit has an impressive drum sound, great triggering response and mass of pads, all representing great value for anybody's wallet.

Early 2011 Alesis unveiled the competitively priced DM7 USB kit. As well as the USB interface, one of the other notable features of this, and indeed almost every other product from Alesis, was its affordability. The new DM7X offers more pads and features while retaining the familiar cost-effective price tag.

As its 'X' suffix suggests, the DM7X is an expanded and enhanced version of Alesis' mid-range DM7 set. This new kit sports extra pre-loaded songs, dual-zoned drum pads, chokeable cymbal pads and has a selection of practice and training routines too. Alesis produce two kit options to partner their new module - the DM7X Kit (as in the review set), and its baby brother, the DM7X Session Kit.

Each drum pad is constructed from an ABS base topped by a rubber covering. Sandwiched in between is a layer of spongy, stick absorbent material protecting the Piezo-type sensors while providing a respectable stick response.

The compact Stealth kick pad clamps directly onto its pedal via a side-access clamp bolt. Being compact it also means it will only allow a single beater - double pedallers would have to purchase an additional pad.

With the exception of 'tom4' and 'crash2', each of the pads attaches to the Alesis DM7X 'Advanced Drum Sound Module' via a single D-type connector which should speed set up. Two separate leads are provided to take full advantage of the module's extra inputs for the two additional pads.

To the rear, not only do we find a USB socket but Alesis has maintained the presence of the two five-pin Din sockets for MIDI IN and a MIDI OUT. This will be welcomed by those who own older MIDI instruments, drum machines and sound modules and want to connect to them without the need for special adaptors.

At first glance, the top panel of the DM7X module may appear to be overly complex. However, most of the upper controls have single function, without having to trawl through masses of menus. The 12 push-buttons of the lower portion are a graphical representation of the kit. These allow the user quick access when assigning voices/sounds to a particular pad or the editable parameters of each pad.

Also, each of these 'kit' buttons illuminates whenever they are pressed, the corresponding pad is struck or, when one of the onboard songs accesses a particular pad during playback. If the module is in editing mode, the pad selected for editing stays illuminated even when an onboard song is playing.

A function unique to the range of Alesis electronic drums is the 'Pad Song Switch' function which allows any one of the designated pads or kit buttons on the top panel to start a song. Great for a 'hands-free' performance, but as this also stops the song or sequence, it has to be used with care.

Alesis suggests set up is possible within minutes but, in reality, this extends to a good half an hour before we are ready to drum. As we check through the pre-set songs, first impressions are good. While some do suffer from grimacing brassy pitch bends and warbles, each track is crisp and clear with plenty to please most musical styles.

The cymbal voices fade a little rapidly for our liking, but there are some impressive drum sounds - especially with some credible snares. The variable hi-hat controller and some of the usual hi-hat features including splashes and chokes on each of the cymbal pads (including the hi-hat) are effective. After some blasts around the kit, any shortcomings of the cymbal sample lengths are soon forgotten.

This is helped by the triggering and stick response from the dual-zoned pads, which give the drums an acoustic-like realism. Changing the sound of any pad takes just three button presses; strike the pad (or the corresponding pad button atop the DM7X module), press 'voice' and the increment/decrement button to find the new sound and save the changes - easy.

The graphic display is bright and clear showing just the right amount of information to avoid being bombarded with gimmicky, confusing graphics. Top of the LCD shows the tempo, with BPM changes from a preloaded song displayed instantly. If, during song-play a new one is selected, it continues to the end of the bar and the new one begins without any pause - great for performance.