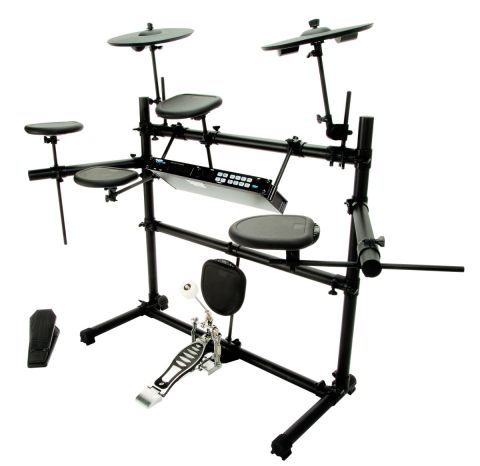 As a route into electronic drumming, there is little doubt that the DM5 kit represents perhaps the most viable option. The Traps E400 sports mesh heads, which will be of vital importance to some, but its sound module is far more limited than the DM5. So if you can live with rubber pads and decent, if not dazzling, sonic performance, the price is the clincher in the DM5 deal.

Alesis may not be a brand that crops up regularly in drum circles. But for anyone involved in music production, the name is near-legendary.

A string of classic, affordable reverb and multi-effect rack units (Quadraverb, MIDIverb and MicroVerb among them) brought the company huge international success and a high profile among project studio owners in the late 80s and early 90s.

Of rather more direct relevance to rhythmatists, however, were the SR-16 drum machine and DM5 sound module. Fifteen years ago, the SR-16 was widely regarded as the most realistic and usable drum box on the market - challenging BOSS's DR-660 for top spot. And the DM5 was popular with everyone from producers needing a rack-mounted source of sounds to on-the-ball electronic drummers.

It is this drum-related heritage that the company is looking to build on with the launch of the DM5 kit. The set-up here is along the lines of a few others that we've looked at in that it's a bargain basement, first-rung-of-the-ladder affair that offers players a slice of the electronic action without having to part with arms and legs to do so.

The hub of the kit might be the DM5 itself, but there's all the other associated stuff to deal with here too. Otherwise it wouldn't be a DM5 kit, it would just be a DM5, wouldn't it? So let's crack into the rack and pad complement...

Given the entry level pricing of the DM5 set-up, it will be no great shock to discover that the kit hangs not from a bespoke, curved rack system but from a bog-standard, all-square affair. It's pretty familiar stuff that tends to crop up on other kits. As such, the skeleton of the system is relatively big-boned.

The tubes are lightweight but of sufficient dimensions to inspire a level of confidence and the plastic clamps are similarly proportioned. There's no way that such a well-priced rig can ever be as sexy as a curvacious, hi-tech Roland rack, but we could certainly live with the basic rack here, particularly if the DM5 kit was destined for practice/rehearsal use only (which is its primary function in any case).

Mounted from the rack are five rubber-faced pads, pressed into service for hi-hat, bass drum, snare and tom duties, and these are joined by a couple of round cymbal pads for crash and ride sounds. The rubber pads deliver the playing experience that you'd expect from such things - they are better than the pads of a decade ago, but still less forgiving and responsive than mesh head drums by some margin.

The pads used by Alesis are no better or worse than those that appear on other cheaper e-kits, and strike a decent compromise between providing a good-sized target and being small enough to allow a compact set-up.

The other physical bits necessary to interface with the DM5 module, namely bass drum and hi-hat pedals, are included in the package. The kick drum pedal is pretty rudimentary and something that you will probably swap for your own favoured unit eventually anyway, while the hi-hat controller pedal is extremely low rent. It's a plastic-bodied thing that puts us in mind of elderly ladies playing 'electronic organs' and using it as a sustain pedal. It's just very flimsy and has no hope of approaching anything like real hi-hat response - but then corners have to be cut, don't they?

The final, most significant part of the DM5 kit puzzle is the brain itself, which resides bang in the middle of the set-up. Suspended from the top rung of the rack, the DM5 is perfectly positioned for tweaking - the unit might not offer the scope of the fiddle-with-every-last-parameter TD-20, but it's impressively flexible.

You are unlikely to get overwhelmed by the choice of kits, nor befuddled by reverb reflection type parameters here, it is more a case of picking a kit that you like the sound of and getting on with it.

One selection of sounds that's particularly engaging appear in the 'random' group. Opt for this collection and you'll be treated to, predictably, random samples of percussion, hi-hats, etc, which add a usefully 'human' edge to grooves. The standard of sounds offered by the DM5 is commendable, but it's fair to say that if you've had experience of posher sets you won't be blown away by its tonal offerings.

The fact is that the DM5 has been around for a long time - more than 10 years in fact, which is an age-and-a-half in hi-tech terns - which means it doesn't rival newer, more expensive types in terms of sounds and realistic acoustic dynamism.

However all this has to be judged against what is undoubtedly a remarkably low price tag. And the function of the DM5 also comes into play here. This is not a kit that lends itself to a life of endless gigs and will be much more at home in a corner of a bedroom or musicroom, or even in a studio, where the DM5's MIDI capabilities can be used to trigger other sounds if the internal palette doesn't suit.

And bearing all that in mind casts the whole shebang in more favourable light.