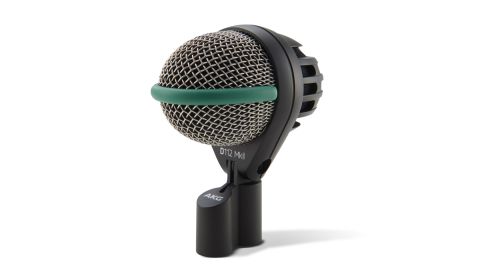 The MkII builds on the classic status of the original but the integrated mic stand mount means that the D112 manages to improve on a classic.

Look around any pub or club over the last 20 years and the chances are that you would have seen that distinctive egg-shape poking out from the drum kit's bass drum port.

Get up closer, and it was likely you'd have recognised that distinctive flash of green that marked out an AKG D112 in the kick drum.

AKG's microphone has been one of the stalwart mics that sound engineers reach for. Its rugged design and tailored frequency curve meant that it was always relatively easy to get a good sound out of the box.

So, when you have created an 'industry standard' microphone, what do you do next? Well, if you're pioneering Austrian audio manufacturers AKG, you discontinue it - and then re-release it with improvements as the D112 MkII. So, has AKG thrown the baby out with the bathwater, or will evolution prove revolutionary?

The MkII preserves the classic silver grille with green flash, and conventional egg shape, but the most distinctive change in the new version of the D112 is the addition of an integrated mic-stand mount.

AKG claim that the MkII can handle more than 160dB SPL without distortion thanks to the open back design, and the rugged grille means that it can cope with life on the road.

One of the D112's design features that has been carried over into the new model is a large diaphragm that has a very low resonance frequency that can deliver response below 100Hz.

The defining feature of the original D112 microphone is the tailored response curve that means it is effectively pre-EQ'd when plugged into the desk. Thankfully this is carried over in the new model - which essentially means that it's as close to 'plug and play' as you're likely to get - simply set up the microphone in the right spot and you have a useable kick drum sound straight away.

The frequency response chart shows a boot at 100hz, and then flat response up to around 3,000hz with another boost, which gives a full upper-mid response for that 'click' of the beater hitting the kick drum head.