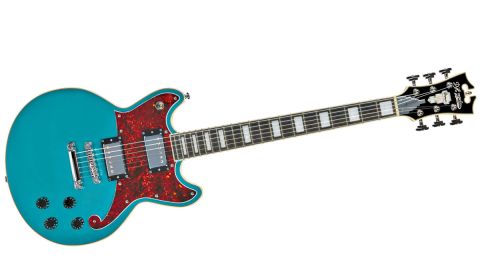 A refreshing take on the double-cut formula that's a must-try for rock and blues guitarists seeking to stand out.

The Brighton is the latest to join the mid-priced Premier line-up and, although it looks to be the most conventional yet, the features it shares with its D’Angelico brethren set it apart from the crowd.

That shape, then: the Brighton’s horns echo a 335, but the body has a whiff of Yamaha’s SG2000 and Revstar outlines, albeit packing Florentine rather than Venetian cutaways, and a lighter weight owing to the basswood construction and a welcome belly cut around the rear.

Yet rather than the painted, chunky neck you might expect from such a design, the Brighton mirrors D’Angelico’s other Premier solidbodies with a satin-finished slim-C maple neck more akin to a Strat. And like other humbucker-equipped solids, Seymour Duncan is behind the pickups, which are also packing coil-splits via the tone controls.

It’s a curious hybrid of specs - and we’ll concede it does look a little odd where the unpainted set neck joins the finished body - but as an instrument, it just feels… right. Up close, it’s a beauty, too: the binding around the fingerboard and body is another nice visual touch and, while we did note some slight untidiness around the ’board binding and sharp nut edges, the Ocean Turquose finish is flawless.

The satin neck could divide opinion; it’s a little alien to a body shape like this, but quickly proves part of its charm, enabling speedier position shifts while retaining the satisfying buttery feel of a 24.75” tune-o-matic bridge setup. Don’t underestimate the benefits of those cutaways, either; you may find yourself spending more time at the widdly end with that unlimited access.

The Brighton is surprisingly resonant unplugged, and there’s a real midrange bark to its plugged-in tones. Like the last D’Angelico we looked at, the neck humbucker is a little dark, but splitting the coils brightens it up considerably. That bridge humbucker will please blues and rock fans no end, with a raw, mid-output snarl that lends itself well to vintage styles and grungier tonalities, while those splits add just the right amount of glassiness for fat, compressed single-coil tones that make this more than capable of funk.

In a lot of ways, the Brighton is D’Angelico’s most successful solidbody yet: it’s familiar, while adding enough new ideas to set it apart from the competition.