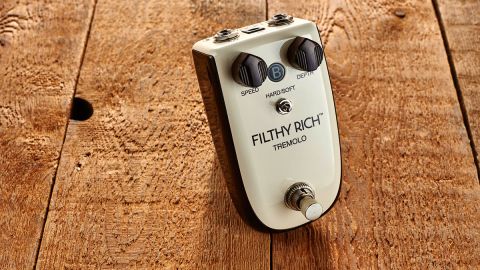 Apparently based on the tremolo found on Danelectro amps from the late 1940s, the Filthy Rich has a very basic set of controls, the same in fact as the previous Tuna Melt pedal.

A switch selects two different tremolo types, Hard and Depth. Hard is a square wave tremolo that’s almost an on/off stutter effect as it has a preset depth and doesn’t go to complete silence.

The Depth knob, in fact, only comes into play on the Soft setting, a much gentler sine wave tremolo reminiscent of 1960s Fender amps, which can go from a skittery flutter to a deep throb. The only other control is an internal trim-pot for a level-compensating boost.

Players who demand tap tempo and a wider range of waveforms might not be interested, but this may be ideal for anyone who wants an affordable slimline tremolo with simple control and, most importantly, a sound that holds its own alongside units that cost much more.