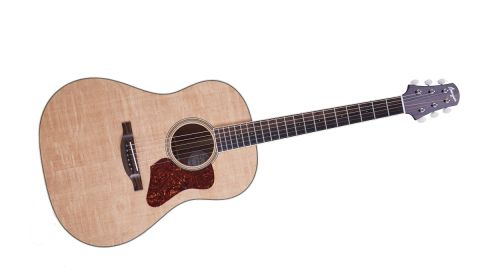 While it might be too pricey for most of us, if you’re looking to splash out, this should be one for consideration.

The most expensive products are going to garner attention.

If you see a Ferrari driving down the street, you are probably going to turn your head regardless of your passion or understanding of cars. It’s in the middle of a crowded market that things really get interesting. What is Ford doing differently to Nissan?

That’s when you really have to look hard and figure out what makes one of those products special. That theory, previously explained so eloquently by Malcolm Gladwell, is what is so interesting about reviewing guitars in the £500-£2000 price bracket: what top did the manufacturer use? Is the bridge the right choice for what you want?

These are the real reasons we write about guitars in the way we do, and hopefully they are part of the reason you want to read what we have to say. We search for the little things that make guitars what they are, and explain what they could do for you.

So when we are given the opportunity to test a guitar that we could never buy, we don’t always leap to volunteer our services. However, when the guitar on offer is labeled ‘Banjo Killer’, it is hard not to be drawn to it.

The nickname comes from the custom Bourgeois of Bryan Sutton, a famous bluegrass player that dubbed his own acoustic ‘Banjo Killer’, which has earned him a Grammy for Best Country Instrumental Performance.

The Bourgeois Slope D is the latest in the long line of models to come from Dana Bourgeois’ stable. After seeing the Beatles on The Ed Sullivan Show in 1970, Dana began playing and tinkering with guitars, and learning as much about the instrument as possible from industry forefathers such as Irving Sloane.

In 1977, the first Bourgeois guitar was commissioned, and 40 years later, the Slope D has landed in our office via The North American Guitar in London, the UK’s sole Bourgeois supplier.

Bourgeois describes the beautiful, natural top as bearclaw-figured Sitka spruce. The name comes from the idea that a bear has scratched at a tree, causing a cross-grain. And while the review model’s top isn’t as defined as some others you might see, the unique look from one guitar to another is part of this wood’s charm.

It still has a cross grain that creates a lenticular effect, a shimmering optical illusion of sorts, but it’s the sound that makes it a favourite for many bluegrass players. Orbiting the soundhole are nine rings, much like Saturn’s, which suggest an out-of-this-world sound awaits the player, and just below is a vintage Tor-tis scratchplate to protect the precious spruce.

The back and sides are made from figured mahogany for a rich colour and sound, and there is a single hole in the bottom. This can be filled by a wooden piece found in a box inside the heavyweight secure hardcase. The piece acts as a plug that fits snugly in the hole, and you can attach a strap to the guitar should you wish to stand and play, using gravity to ensure the wooden piece stays in place - a simple but clever system that shows off good craftsmanship.

The binding that joins the top and back of the Bourgeois to the sides is called ivoroid, an attractive plastic substance that is popular among luthiers. And the back of the guitar has a straight herringbone pattern running up through the middle toward the neck, which is joined up with the snakewood head as a single piece.

A dark-brown ziricote fretboard displays stunning figure, only interrupted by 20 fret markers and all the appropriate MOP dot inlays at frets three, five, seven, nine, 12, 15 and 17. And the head is also topped by ziricote veneer. The nickel-plated Waverly tuners have ebony-coloured pins that are smooth to the touch and comfortable to use.

After receiving the Banjo Killer, opening it, tuning it, and playing it, we left it for a day-or-two and found that the tuning was secure. The tuning remained so until we shipped it back to its rightful owner.

This guitar is built well. Simple things, like staying in tune, is a sign of that. The Slope D size has a bottom that is larger than we tend to prefer. But where the action happens, at the waist, it was comfortable to play - and, boy, did it play well!

We’re not sure we recall hitting duff notes while strumming through familiar songs, and ones we have only recently decided to learn or write. It’s quite remarkable to discover a neck that is so easy to play on. The spacing of the frets were accurate and allowed enough space to manoeuvre; there was no fret buzz anywhere along the neck.

It offered versatility. We were at home playing ballads and pop-rock records, but like a switch the Banjo Killer lived up to its name and came alive with the use of a plectrum or a rougher finger strum. Blues, bluegrass and folk songs flourished with the warm mahogany sound that was punched through with the sharper bearclaw Sitka.

The Slope D doesn’t offer an electronic pick-up, and while it would be a shame to see wires and implements attached to such a beautifully crafted instrument, the target players for a guitar such as this may appreciate a good sound system that can be amplified, without the use of an additional microphone stand.

Bourgeois has created a fantastic guitar, as you’d expect. The construction is top-of-the-line and the sound it creates is simply sublime. The Banjo Killer certainly is expensive - but it is not a victim of its price point. For us, it might be a few hundred pounds more costly than it should be.

But if you’ve got that kind of money, this could well be a tidy investment - especially because guitars, and how they play, is all about personal fit and taste at this level.

The all-in-one mahogany Dana Bourgeois headstock and neck offers a taste of superiority, and the Central American woods create something fantastic - it would look beautiful as a pride-of-place instrument hanging centrally in a music room. This guitar truly is a pleasure to play. We might have to take out a few loans, but this guitar might well be worth it.