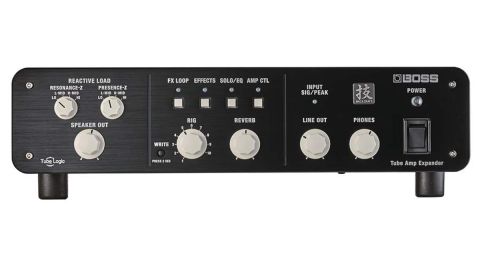 An indispensable tool that can yank any tube amp - large or small, vintage or modern - into the 21st century.

The humble load box has come a long way over the years.

Back in the early days of rock ’n’ roll, there was never a need for one. Early amplifiers were mostly low-powered anyway, and PA was practically non-existent, so the impetus was to increase backline volume rather than tame it. As the 1970s faded into the 80s, PA systems became more sophisticated and way more powerful. Filling a stage backline with rows of 4x12s and 100-watt heads still looked impressive, but not for the FOH engineer trying to balance levels for the audience, much to the annoyance of guitar players who wanted to turn their valve amps up to make them sound good.

Today, many modern professional concert stages are ‘quiet’, with no backline sound at all and in-ear monitoring in use for artists. But despite huge advances in digital modelling, many guitarists still rely on valves for their core tones. So how can you crank up your favourite 100-watt head on a quiet stage, or in your home studio, without making enemies of your sound engineer and neighbours?

The simplest load boxes are little more than resistors and sit between the valve amp output transformer and the loudspeaker, soaking up excess energy and dissipating it as heat. However, a loudspeaker isn’t a passive resistor, it’s an active component with  characteristics that constantly change with frequency and amplitude. More sophisticated load boxes use special circuits to properly mimic the way a loudspeaker reacts, keeping all-important valve tone and dynamics intact at any volume level. They may also have special built-in connections for recording or PA consoles.

Recent digital modelling innovations have added new functions, such as impulse responses, cabinet and microphone simulation - and that’s where Boss’s Waza Tube Amp Expander comes in, combining all this functionality and more into a single box intended to bring the best out of any valve amp, in any situation.

The Waza Tube Amp Expander is smartly presented, with a tough steel fan-cooled chassis and black brushed aluminium control panel giving it the look and feel of an expensive piece of hi-fi kit, which it is. The front panel divides into three sections. On the left there are presence and resonance controls that enable separate tweaking of the reactive load’s high- and low-frequency impedance response, together with an output level.

In the middle, you’ll find on/off buttons for the Tube Amp Expander’s effects loop, compressor and delay and equaliser, together with an amp control button. There’s also a level control for the built-in digital reverb and a Rig selector that writes and recalls up to 10 control settings to the Waza’s onboard memory.

On the right, there are separate line-outs and headphones level controls, with a large, purposeful power switch. Interfacing is the name of the Tube Amp Expander’s game, and around the rear there’s a plethora of connectors. Besides the necessary amp input and speaker outputs, you’ll find mono and stereo line-outs on XLR, an effects loop, MIDI in and out/thru, headphones, USB, footswitch sockets and a clever amp control interface that can, in most cases, operate your amp’s channel-switching function. The loop and line-outs all have independent ground lifts to keep hum out of the signal path, while the amp input has switchable impedance and a level optimise switch, which can cope with anything from small single-ended amps up to an impressive maximum of 150 watts.

The speaker outputs are driven by the Tube Amp Expander’s built-in 100-watt analogue power stage, meaning you can not only tame heads that are too loud but also boost the output of your favourite small amp to use it on any stage. You don’t need to plug speakers in if you don’t need them.

As well as having an external loop, the Tube Amp Expander uses Roland’s clever Tube Logic technology for its onboard effects, including reverb, delay, compression, cabinet/mic simulation and three EQs, all of which can be programmed over USB using the dedicated editing app. USB also transmits and receives digital audio, and a separate app will let you load up to four IR impulse (response) files, while the Tube Amp Expander’s MIDI functionality lets you change Rig settings and continuously control other performance parameters.

On paper, it looks as though Boss has thought of everything - and in practice we think that’s probably true. We used the Waza Tube Amp Expander with a modern 55-watt channel-switching valve head, and with a couple of small tweaks to the presence and resonance controls it was sonically transparent, letting us wind up the amp’s master volume to extract the juiciest tones yet keeping the output levels down to conversation level, with no obvious loss of tone or dynamics. The fixed level mono and stereo line-outs are very quiet, and using the Waza’s excellent built-in effects saves studio equipment for other tasks, as well as producing consistent, quality results. Overall, we were highly impressed with the sound quality and features.

Boss’s Waza Tube Amp Expander is a great solution to any practical live or studio problem that a guitarist toting a valve amp might face. That said, it could be overkill for your unmic’d local pub gig. However, on a modern professional stage or in a recording studio, it will deliver serious quality tone where it’s needed with minimal fuss.

There are only a few minor drawbacks, the most significant being that currently there’s no mobile app - the editing software, which is needed to access all the Waza’s digital functions, only works on PC or Mac computers. The Tube Amp Expander seems better suited to live use than its most obvious competitor, so an Android or iOS version to edit stuff in the field would be a big improvement. The cooling fan could be a little distracting in some home studios, too. It’s hardly an impulse buy, but for what’s on offer compared with the competition, we think it’s great value.

Aimed primarily at pro players, studios and serious home recordists, the Waza Tube Amp Expander is an indispensable tool that can yank any tube amp - large or small, vintage or modern - into the 21st century.