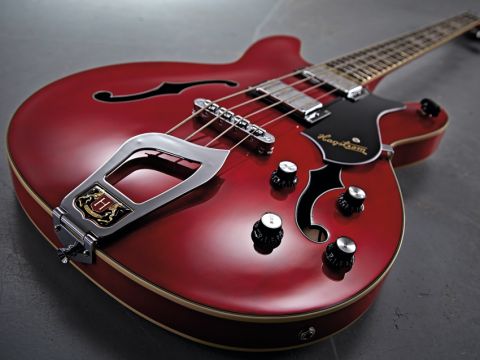 A hard bass to fault. Semi basses have never been as popular as solids, but at this price it's well worth trying out.

The more, ahem, seasoned reader may well cast their eyes over this new Viking Bass and be reminded of another Hagstrom four-stringer from the '60s - the Concord.

The Concord was a decent bass, but the Viking makes two significant improvements. First, the two-a-side headstock looks far better than the Concord's Fender Coronado-like styling, but more importantly the Viking's sound options are far superior to its predecessor.

But more on that later - the Viking is a slimline hollowbody bass with a moderate weight and an appropriately shorter scale length to give good visual proportions. With a fully bound body and neck, twin rounded cutaways and a couple of f-holes, the Viking pays closer homage to the classic Gibson EB-2, though thankfully at a far more pocket-friendly price.

With a harp-shaped trapeze tailpiece, separate bridge, floating scratchplate and a pair of pickups (that look as if they came out of the Reslo microphone factory), this bass exudes a retro persona all of its own. Add to that the ebony-like synthetic 'Resinator' fingerboard adorned with tasteful pearl block inlays and you have a fine-looking instrument indeed.

As handsome as it is, the Viking is all about sound - and even though it's loaded with a pair of 'vintage-voiced' pickups, the exacting needs of modern players are well taken care of here. If you want those big, body-shaking tones of the '60s soul bands then you'll find them here, but you can still easily clean up or toughen up your act, projecting every note with clarity right to the back of the hall.

The secret here lies with the chickenhead six-way rotary switch and the intelligent wiring that the dial controls. It provides single-coil or humbucking modes and the ability to use individual pickups or blends in both modes - so add these tonal selections to the volume and tone controls associated to each pickup, and you begin to appreciate just how much sonic variation is at your fingertips.

Using the selector switch to dial in your basic sound then tweaking tones and volumes, you are presented with a selection of blended tones from that setting alone. Multiply this by six and you get an idea of how much fun you can have. In a gig situation you're most likely to stick with the humbucking modes - where the full force of the Viking is unleashed - but in the studio, the cleaner and subtler voices from the single-coils will often win you over.

Our one gripe is that the Viking lacks the ability to blend one pickup in single-coil mode to the other in humbucking, but to be honest you're really not going to miss that here. We think Hagstrom has got it just right.

With such good attack, both fingerstyle and pick players will appreciate the Viking, but like most semi-hollow designs it doesn't suit slap techniques. Try that and someone is going to get hurt.

Another thing to watch out for is that with the switching options and individual volumes, it's not too hard to accidentally turn yourself off, but let's face it, you'll only do it once.

Overall this is a handsome, retro-styled bass that, despite its looks, is well-suited to the modern player. The Viking is well worth checking out if you want a striking and lighter-weight instrument with a very distinctive voice.