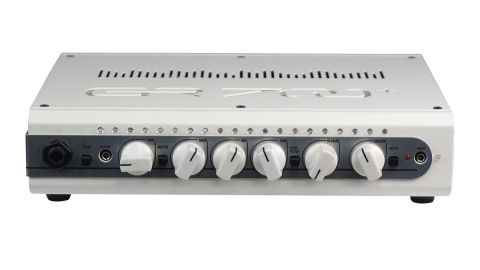 The GR Bass 700+ is a welcome addition to the micro head market.

The GR Bass 700+ is the smallest 700-watt micro head on the market, according to Italian bass amp and cabinet manufacturer Gianfranco Rizzi.

Is this a case of 'another day, another micro amp'? Not quite.

Of course, there's plenty of choice on the market these days for those of us looking to downsize or create a more convenient set-up for when circumstances dictate. However, not all micro heads are powerful enough to compete with the acoustic volume of the more lead-fisted John Bonham wannabes.

In such instances, using a tiny amp equipped with ample headroom might be the difference between being sonically anonymous or sitting pretty in the mix onstage or at rehearsal. With this in mind, the GR Bass 700+ fits the bill for both convenience and power. And for those who like to worship at the temple of individuality, a little extra will afford you the luxury of customising the amp's external casing, choosing its colour and adding your logo.

With 700 watts RMS at 4 Ohms and 350 at 8, the 700+ feels rock solid in your hand, weighing 2.1 kilos and sat on 6mm-tall rubber feet. The front panel features an input jack, a -10 dB switch, gain and master volume controls and a three-band EQ. There's also a mute switch, which displays a red LED when in use, leaving the tuner-out signal intact, as you'd expect.

In addition, there's also a middle frequencies filter switch as well as a subsonic filter switch, which can be used to help protect your cab's speakers by eliminating frequencies under 22 Hz.

It also features 3.5mm jack sockets for aux-in and headphones-out. The front panel's features are completed by a handy DI/ headphone volume pot and a horizontal blue 20-LED VU meter that fans of Knight Riderwill no doubt love (look it up, kids).

The rear panel features two Speakon sockets, an XLR DI socket, a 6.35mm jack tuner output, send and return jack sockets, a pre/post EQ push-switch, a 9V DC output, an on/off switch for the amp's built-in fan and a switch to choose between a dot or bar display for the aforementioned VU meter.

A couple of minor gripes with the build quality; when you look down at the jack sockets on the rear panel, the washers and nuts obscure the print, indicating which socket is which. In a practical situation, this means having to either lift the amp to get a proper look, or craning your neck over the back of your cab.

Our other slight issue is that the front panel's push switches look a bit cheap, and therefore look out of place on what is an otherwise slick bit of kit. There's no built-in tuner, either. We personally believe that in 2016 all amp heads should have a built-in tuner as standard, and more so with micro heads, when part of their appeal is portability and convenience.

The standard colours included in the price are black or white. Customising the head to any other colour will cost you €20. Likewise, adding a logo costs €30 and customising the front panel with a logo or a different colour is a further €20.

Rizzi's motto is 'Respect your bass'. By this, he means that the 700+ does not modify the sound of your bass guitar. The philosophy is that you create your sound with your fingers and your bass: with this in mind, we plugged in our Music Man Stingray Classic, activated the -10 dB switch, set the EQ controls to the 12 o'clock position and left the subsonic filter switched off.

Using the VU meter we added a decent amount of gain before setting the master volume to the 11 o'clock position. We're happy to report that the 700+ immediately sounded immense. We'd have been ready to play a gig with that basic flat setting there and then.

Don't get us wrong, we've achieved some entirely pleasing results using other micro heads, but this was unquestionably the most impressive flat setting, plug in and play moment we've enjoyed to date.

"We hope the masses will be prepared to deviate from the marketplace norms and at least try this amp before making a final decision on which one to purchase."

The 700+ instantly delivered a satisfyingly full bottom end, complemented by an equally impressive punchy mid-range and all the attack you'd expect from the top end of a Stingray sporting a new set of roundwounds. We honestly didn't want to change a thing. It just sounded great, reminding me of the saying 'simplicity is the key to success'.

When we began exploring the amp's tonal capabilities beyond a flat setting, the 700+'s EQ was pleasingly responsive and offers enough cut and boost to satisfy the majority of players.

The bass EQ gets a special mention: unlike the other micro heads we've tested, the GR Bass 700+ has a huge-sounding bottom end that, crucially, is beautifully defined. This makes for a genuinely reassuring tool to have at your disposal. Dare we say it, it also generates the kind of warmth we'd normally only associate with a tube preamp.

As an aside, we're fairly certain that the slappers out there will have endured, on at least one occasion, the frustration of knowing that their pneumatic thumb has been rendered inaudible to everyone in the room except them.

Well, the 700+ seemed to add muscle to my slapped A, D and G strings. We know there's a lot you can do with your set-up to combat such issues, but these impressive results served to put a smile on our face (if not our neighbours').

The micro amp market is becoming an increasingly crowded one, but the GR Bass 700+ has a lot to offer. With a sonic delivery that won't disappoint, its price point sits neatly among its better known competitors. The 700 watts under an optional customised casing provides all the power you'll need, with plenty of cosy headroom to fall back on.

We hope the masses will be prepared to deviate from the marketplace norms and at least try this amp before making a final decision on which one to purchase. The bottom line is that the GR Bass 700+ sounds great, and we don't know a bassist who doesn't look for that in an amp.