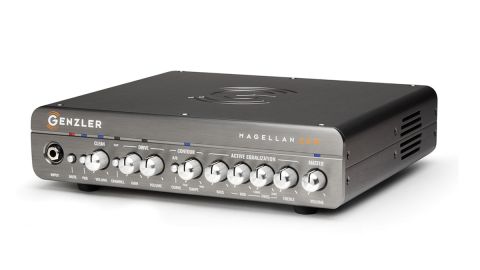 A spectacular re-introduction to the work of Jeff Genzler and his team.

Jeff Genzler has earned himself a reputation for designing a list of innovative and superior quality bass amps, such as the Shuttle and Streamliner series.

Thankfully, Genzler and his long-time engineering partner Scott Andres have now returned with an "uncompromising and dedicated spirit" to present us with their next generation of bass amplification.

Straight from the box, the Magellan 800 feels familiar. Housed in a chic, aircraft grade aluminium chassis with an extruded front panel, the amplifier is exceptionally tranquil to navigate and interact with, considering the vast palette of features that it offers.

LED-supported features such as Mute and PAD switches greet your signal path through a standard 1⁄4" unbalanced input. The first of these features places the amplifier into mute mode while still allowing the tuner out to remain active, accessed from the rear panel.

The second attribute deals with passive or high gain instrument signals, with a well-considered attenuation adjustment of -8.5dB of gain to the input stage.

Constructed with dual channel design, the Magellan 800 clearly encapsulates a number of design features initiated in Genzler's former innovations. The clean channel provides a transparent reproduction of the instrument's tonal footprint, while at the flick of a switch, the drive channel emulates some of the smoothest tube distortion we've encountered in an on-board solid-state feature.

However, the real innovative thinking involved in the production  of this amplifier becomes evident when you engross yourself in the variable A/B contour feature.

This unique characteristic enables you to provide interchangeable pre-shaped curves to your signal path: when flat, the circuitry is fully bypassed; when engaged, Curve A boosts low and high frequencies while simultaneously cutting the mids, and Curve B gently attenuates the high frequencies and accentuates the low mids. This allows an abundance of modern, scooped, slap bass tones, as well as formidable vintage characteristics from a bygone tweeter-less era.

The marrying of this sophisticated contouring system with Genzler's FET preamp circuitry, and an active three-band equaliser with parametric mid-range frequency control and a formidable 800 Class D power amp, makes this product impressive. What's even more remarkable is that the package weighs a mere 2.83 kilos.

Despite the Magellan's high-powered exterior, this amplifier is as much at home as a practice tool as it is on a high-end production live stage. The rear panel introduces the inclusion of an auxiliary input that provides an ideal resource for connecting to a third party device, while a headphone out allows you to practise without the need of a speaker load, conventionally supplied through dual paralleled Neutrik Speakon outputs.

The transparency of this amp is something that really can't be highlighted enough: upright players and electric players alike will bask in a sea of articulation from the clarity and headroom found under their fingertips.