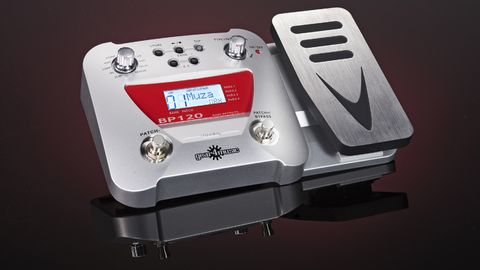 A decent and affordable selection of bass effects and beats to play along with.

It's rare for bass players to take centre stage, at least for too long, and anyone other than Jaco Pastorius optimistically shuffling towards the spotlight to pull off a lengthy bass solo will usually see queues at the bar increase tenfold.

However, the addition of a couple of well-placed effects during your opus may well turn opinions around and, even if you're just staring out with the bass guitar, a multi-effects unit such as the BP120 can add some real zing to your playing and make practice sessions things to look forward to. They can even inspire you towards a particular melody or song idea.

The BP120 is a floor-based multi-effects processor that offers an on-board treadle - just like that found on a standard wah - that you can assign all sorts of functions to (such as volume, wah and even a selection of effects parameters).

Internally there are 11 modules of effects that contain a total of 54 processors with which to experiment, and these are arranged into two sets of 48 patches. One set remains as presets, while the other can be edited, alerted and saved by the user.

The front panel is compact but nicely designed and includes a clear backlit LCD display that shows where you are in the editing infrastructure at any time. An 11-way effects selection pot gives you access to each of the modules and from there you can use the Type/Para/M.Vol pot to choose parameters within each one to alter to suit.

A pair of sturdy footswitches switches allows you to scroll up or down through the presets, which is a good method of quickly getting to grips with what the unit can do.

Power comes from an included nine-volt PSU, so no batteries are required, and the unit's mono output socket can be plugged either into the input of your amp or a set of headphones.

The unit also includes a drum machine that provides a total of 30 beats to play along with. These range from samba and jazz to funk and hard rock and, although the samples won't win any prizes in the quality stakes, they beat practicing with a metronome hands down. You can alter the tempo and volume of each beat and you and a guitarist friend can have huge amounts of fun riffing along.

You may think that effects such as fuzz or over-the-top modulation sound cool - and they do - but don't underestimate the power of compression or different EQ settings for bass, as these can be equally ear-catching.

We'd suggest beginning with the choice of eight amp settings to obtain the right foundation for your tone, and then marrying that with a suitable cabinet sim. From there the world is the mollusc of your choice.

If, like us, you just want to play, picking a parameter you like and adjusting it for your own use is a tried and trusted procedure. Save it to a user- patch, rename it if you so desire and you're away.

As the two Bank buttons are so small, it'd be very difficult to change these during a song - you'd have to bend down and perform the task by hand - but if you save your patches so they're one after the other, you shouldn't go too far wrong.

Where the drums patterns are a tad muffled, there are no such issues with the sounds of the BP120 overall and, even though you may outgrow it pretty quickly once your technique improves, it's a very cool unit indeed to play around with. Be warned, though: we've yet to tire of playing along to the drum beats.