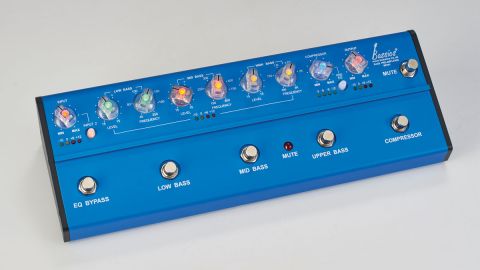 This is a product with great potential, and we'll be watching its progress with interest.

Malcolm Toft, the designer of Bassics' new BPA-1 preamp, has a serious reputation, having mixed the Beatles' Hey Jude, engineered albums by David Bowie, James Taylor and T-Rex and founded Trident Audio, whose recording consoles have been used by Stevie Wonder, Elton John, Queen, Radiohead and Muse among other planet-sized bands.

His company's first product is aimed directly at bass players and claims to make amp controls redundant, placing them at our feet.

That, in itself, may or may not be worth an outlay of £445, depending on your point of view: however, the BPA-1 has a stack of useful features that make it much more than simply an amp-in-a-box.

You may not need all of these, so consider your needs and the potentially cheaper solutions that address those needs before you buy - but no matter how and where you play, we think you'll be impressed by the features on offer here.

The chunky, two-kilo box is immediately made popular round these parts by the big, multicoloured controls which light up like Blackpool Pier when you activate those parts of the unit, plus the included power cable (effects manufacturers, take note!), the silent switching and the fact that the internal power supply gives you peace of mind by adapting to AC voltages from 85 to 265 volts. That's the gig in Antarctica sorted, then.

You've got two standard inputs, so feel free to plug in two basses simultaneously and manage each one with individual level controls: one of the inputs has an impedance switch for piezo pickups, such as the one on your upright bass.

At the other end you've got two fully balanced DI, jack and XLR outs and an effects loop. Between those points there's a bypassable three-band EQ with up to 15dB boost or cut (centrally detented for off), and a studio-quality VCA compressor. 'Bypassable' is the key word here: if you don't want a section activated, stamp on the bypass button and the lights go silently off. Control all this with an overall output level and an overall mute.

Once you're plugged in, with one or two basses, you can either use your existing bass and amp EQ in tandem with the BPA-1's own EQ, or set those controls to flat and just use the ones here.

For our test we did just that, enjoying the quick, assertive response of the controls and the easy mastery which they give you over your sound. The compressor was especially effective, as it should be given the designer's studio history, and the boost is clean thanks to the unit's extra headroom.

The downside of all this is the unit's significant cost, although remember that you're paying for Toft's unparalleled heritage and the UK build - and we believe in paying for quality. There's also the fact that not everyone will like the blue box and Christmas-tree lights. Perhaps Bassics should consider a subtler chrome or black alternative?