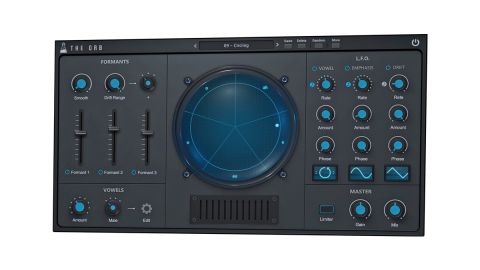 A highly configurable multi-vowel formant filter with powerful LFO modulation and an intuitive interface, The Orb is distinctive, characterful and creative.

The Orb (VST/AU/AAX) is a formant filter plugin built to imbue any source signal with a vowel-like sound, but going beyond the usual EDM ‘yoys’ we all know and love (or hate...).

The genuinely-not-a-gimmick ‘Orb’ at the centre of the interface hosts up to ten editable vowel filters at a time, while three LFOs jump and slide between them.

The formant filter itself comprises a trio of parallel zero delay feedback band-pass filters, their centre frequencies locked down for each vowel in Male, Female and Child modes, and editable in Custom mode (see boxout). The three faders control their individual levels, and the power buttons at the bottom mute them.

The central Orb is where the actual filtering takes place, through movement of the little blue puck by dragging, modulation or host automation. Twisting the Amount knob divides the Orb into between two and ten segments, each one imposing its own formant filtered vowel sound from a ten-strong list (‘ah’, ‘e’, ’ee’, ‘u’, ‘o’, ‘i’, ‘ae’, ‘aw’, ‘a’ and ‘er’) on the input signal when the puck is moved into it.

As the puck moves within and between segments, it sweeps around the formant filter’s base frequencies and ’morphs’ (or jumps) between vowels, depending on the settings of the Drift Range and Smooth knobs in the Formants section.

The central knob in the Vowels section collectively shifts the three band-pass filters that make up the formant filter to give the vowels Male, Female or Child-like characteristics. As you’d expect, Male is the ‘lowest’ of the three, Child is the ‘highest’, and Female sits in between. Switching to Custom mode, however, grants access to all 30 frequencies (which default to the Male set), as well as the names of the vowels shown in the Orb. Thus, you can tweak the Male vowels to taste, or come up with new ones of your own and save them with the preset.

Unfortunately, the dialog in which all of this is done is decidedly clunky. Frequencies have to be entered numerically using the keyboard, rather than via knobs, sliders or spinners, and changes have to be accepted and saved before they kick in. Next to the slick main interface, it’s tiresome stuff, and we hope it’ll be replaced with a real-time system at some point.

Filter frequency offset is represented by the dot’s angular position within the segment: with Drift Range at zero, the frequencies don’t change no matter where the puck is placed in the segment; with Drift Range turned clockwise, moving the puck towards the edges of a segment shifts the frequencies by up to a maximum of 1kHz in the direction specified by the Polarity knob – positive, negative or bipolar. The interpolation between filter frequencies and vowels is established by the Smooth knob: completely stepped when fully anticlockwise and seamlessly smooth clockwise.

The distance of the puck from the centre of the Orb determines the filter resonance (Emphasis), from sharp and fully vowel-like at the outer edge to sounding essentially like a regular band-pass filter at the centre. Clicking the blanking plate below the Orb reveals Emphasis and Drift knobs, for specific and more precise adjustment of each.

The Orb’s three LFOs can be used to throw the puck around at any speed up to 2kHz in any direction, cyclically or randomly. The Vowel LFO jumps the puck between vowels, maintaining its relative angle within each segment; the Emphasis LFO modulates its radial distance; and the Drift LFO swings it cyclically to either side of its central position.

Speaking of randomisation, AudioThing’s usual Random button is onboard, too, creating presets from thin air, with the right-click Lock function rendering individual controls immune to its changes.

Although certainly not a plugin you’ll want to use on everything, for spicing up drum loops, basslines (of the low-mid variety) and pads, The Orb is absolutely wicked, delivering everything from static tonal alteration to funky, highly animated vowel ‘sequencing’. The obvious addition would be a motion recorder for capturing and looping manual puck movements, but as it stands, at this price The Orb is a must-hear creative processor for any electronic music producer.