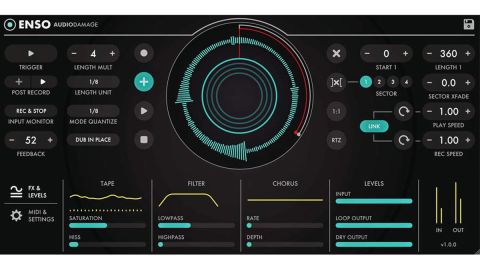 Enso is a powerful - if rather esoteric - source of inspiration for the experimentally-inclined loop merchant.

Compared to the power of modern music software, the humble looper pedal might seem a little anachronistic these days.

When even the most basic DAW offers multiple tracks of audio recording at your fingertips, who needs such a simple tool for looping and overdubbing? However, with a tape-inspired feature set and an excellent crop of effects, Audio Damage’s Enso makes a solid case for thinking otherwise.

Enso (PC/Mac/iOS, VST/AU/AAX) is a single-track looper with a stereo input, a stereo output and a recording buffer in between. From its initialised state, punch Record and the buffer captures up to ten minutes of audio (or five minutes in the case of the iOS AU version), which automatically begins to loop when recording stops. Hit Record again, and the incoming audio is overdubbed on top of the looping buffer. Alternatively, Enso also allows you to import and export audio to/from the buffer directly, should you wish to dub over an existing loop.

As expected, recording is controlled by Stop, Play, Record and Overdub transport controls, but the last three of those actions can also be governed by the Trigger control. This context-dependent button effectively replicates the footswitch of a stompbox looper (and is easily mapped to a control pedal for precisely that usage), starting and ending the initial recording when clicked/stomped, before transitioning between Play and Overdub modes.

In both desktop and iOS versions, Enso uses the host DAW as a clock source. The plugin has a pair of sync controls for setting up quantisation of the recording start/end points and pre-defining the length of the record buffer loop based on beat divisions from the host project. In this ‘setup’ section, you also get an input monitoring drop-down (to control if/in what context the input is fed through to the output), and a Post-Record selector, which dictates whether Enso goes into Play or Overdub mode once the initial loop recording finishes.

So far, so Ed Sheeran... but Enso’s winning formula lies in the fact that, although its workflow is based on that of modern loopers, its sonic behaviour is modelled on that of vintage tape machines. This is most obvious in its tape-emulating effects (see Tape tools), and the absence of pitch correction when changing the speed or direction of playback.

Enso packs a trio of effects for processing the audio from the record buffer. The first is the Tape module: dial in Saturation and Hiss to emulate the lo-fi qualities of magnetic tape. After that comes a band-pass Filter with individual High-and Low-pass cutoff sliders. Last is a Chorus effect, featuring Rate and Depth parameters.

While none of the effects are particularly complex in terms of the controls they offer, when combined, they do an excellent job of recreating the character of recording to tape: Hiss and Saturation can add extra texture to sounds; the Filter can darken and ‘age’ the signal nicely; while the Chorus adds a touch of ‘wobble’.

The effects are particularly good when used with the Dub In Place function disengaged, allowing them to ‘stack’ as the processed signal passes through them repeatedly. Try dialling in a little Saturation and Hiss, then listen as they slowly ‘grow’ and take over the loop; or add a little low-pass filtering and hear the loop get darker and darker with each trip round.

To take full advantage of this latter function, Enso has separate speed controls for recording and playback, which essentially act like the head controls of a tape machine. What’s interesting, though, is that these can be moved independently, and also be set to negative values, in which case they run backwards. Because of this, it’s possible to have the buffer playback running forward while overdubbing in reverse, and vice versa. You can also record and play back at completely different speeds, which can yield very strange results.

On top of this, Enso offers two different styles of overdubbing that can be switched using the Dub In Place control. The main difference between these two modes is whether or not the feedback signal passes through Enso’s effect modules. With Dub In Place engaged, effects are only applied to the output signal, so the audio only travels through each processor once, at the end of the signal path. When disengaged, the audio from the record buffer passes through the effects every time it’s looped back in, increasing in prominence with each cycle. Enso also has a Feedback control: with Dub In Place engaged, this dictates the level by which the volume of the existing signal is reduced when overdubbing; with Dub In Place disengaged, it adjusts the amount of the output fed back into the recording loop, acting more like the feedback circuit on a delay effect.

Enso also gives you the ability to divide the recording buffer into up to four Sectors, which can be triggered individually and crossfaded between each other. The position of these is controlled by Enso’s ‘obloid’ controls, which allow values to be adjusted by tapping, dragging or manually inputting numbers. Despite the flexibility of these controls, setting Sector positions and lengths can still be pretty fiddly, particularly when you’re trying to grab a chunk of a loop on the fly while overdubbing. Extra control would be handy here - for example, the ability to automatically divide the record buffer into quarters or create Sectors synced to the project’s beat grid.

This minor quibble aside, Enso is a world of fun, and excels at replicating the warped sonics of old-school tape manipulators, making it a must for modern producers and guitarists looking to embrace a ‘musique concrète’ ethos in the box. Furthermore, when placed on an aux return, it makes a great heavy-handed tape echo, particularly with a healthy dose of those onboard effects; and it’s an extravagantly creative tool for layering up rhythmic synth lines, drum loops and found sounds.

Enso isn’t the most versatile plugin in the world, but it’s definitely an enjoyable studio gadget that’s guaranteed to inspire fresh ideas, both in the studio and on stage.