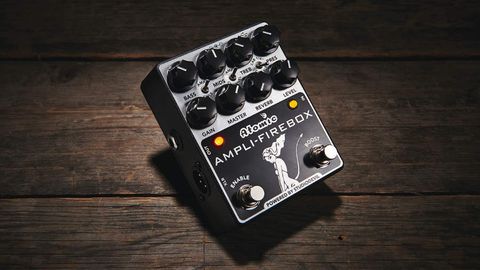 Atomic’s original Amplifire, featuring amp modelling by Studio Devil, became a favourite with many guitarists by offering a more affordable and portable alternative to the established amp modelling hardware rigs.

That model has spawned new six- and 12-footswitch models as well as the undeniably cute Ampli-Firebox which puts amp modelling and IR-based cabs, plus a smattering of effects, into a compact stompbox with a footprint no bigger than an EHX Little Big Muff.

Sporting dual simultaneous outputs (the standard 6.4mm jack output being complemented by an XLR output) the Firebox has nine fully-programmable presets on board, each based around a specific amp model.

While you can access all the presets from the front panel and tweak the sound via eight knobs that reflect the control layout of a typical amplifier, you’ll need to use the included USB cable and access the free editing software (for Mac and PC) to get the full benefit of the pedal, getting those presets exactly as you want them to sound. Here you get access to changing the amp model (21 available including four power amps) and setting up any effects for the preset as each has a chain of effects in a set order.

You’ll find noise gate, compressor and boost (Distortion, Screamer, Overdrive, Fuzz or Clean Boost) effects before the amp block and Echo and Reverb after it. There’s also a fairly comprehensive EQ with one dedicated band pre-the amp block and three other bands that are assignable pre- or post-amp. You can also access the Cabinet section which uses impulse response (IR) modelling to simulate mic’d-up speakers - each amp model has its own specific IR but you can load any .wav IR file to the pedal to replace them (you can store the originals on your computer for safekeeping).

The nine presets are available via combinations of two three-way toggle switches. The way the unit is set up, as shipped, is that the Style switch selects a group of three Clean, Crunch or Lead amps and the Channel switch selects the individual amps in each group. A third toggle switch determines if the speaker cab IR is turned on for the standard 6.4mm output, XLR output or both - this allows plenty of flexibility, including having the pedal in your standard guitar signal chain without IR, but being able to send a separate signal with IR to the PA.

As for the footswitches, the Enable switch has two modes. Its default setting is as a bypass for the pedal, but by holding the switch down for three seconds you will enter A/B mode where you can use the footswitch to toggle between two presets - perhaps two different amps or the same amp with different amounts of gain. The second footswitch, labelled Boost, is for turning selected effects on and off. You can use the software editor to set it to do a single task, like engaging overdrive, or for several changes with one push, like turning echo off while turning reverb on.

While there’s not overwhelming amounts of different modelled amps here, they are well-selected to cover a wide range of musical tasks and run from familiar classics like a Fender Deluxe and ’59 Bassman, an AC30 Top Boost and various Marshalls to newer stuff like a Cornford and Friedman. Factor in the amount of editing power, particularly with the EQ and IR loading, and there’s a lot of scope to create authentic sounding and playing amp tones that are capable of holding their own against more expensive options.

The Ampli-Firebox ticks many boxes. It’s a neat source of amp sims for recording and also a totally portable rig that’ll fit into a guitar case and give you a solid sound straight into the PA for gigs where you can’t take on amp, or as backup for a malfunctioning amp. Couple it with, say, a Boss MS-3 or an Eventide H9 to add effects and you’ll have real flexibility in an easily transportable package.

As part of your ’board it can provide backup if your amp goes down, or in a traditional stompbox role where it can make a great contribution to your sound delivering amp-flavoured drive and boost. There are plenty of amp-in-a-box pedals out there but this is an amps-in-a-box pedal.