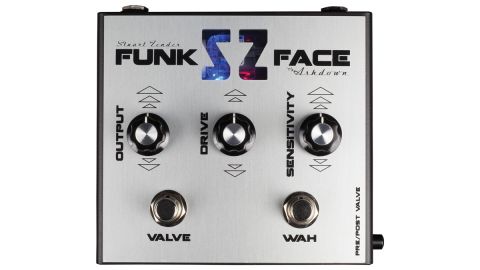 Stuart Zender is no stranger to this site, so we’ve been eagerly awaiting the release of his pedal collaboration with Ashdown - and boy, is it worth the wait!

Combining valve drive and wah effects courtesy of a twin filter setup, the Funk Face unit injects fuzz, drive and dirt into your playing by way of a 12Ax7 valve in its drive stage.

Using a selector switch on the side of the chassis, the player can opt for the wah effect either before or after the valve; this has a dramatic effect on the sounds. Controls for Output, the overall level of the pedal, and Drive provide adjustment so you can add some tasteful drive to your tone or aim for snarling, wall-levelling grit.

The Sensitivity control affects the sensitivity (obviously!) of the envelope filter in response to your instrument’s output and your playing style. Some experimentation is advisable as a small adjustment can produce significant changes to the effected tone.

Selecting the Valve option turns the ‘SZ’ display red; blue signifies the twin dynamic filters of the wah effect being called into operation; and with both selected, the display turns almost purple with both colours combined.

So how does it sound? Well, we’re happy to report that it put a funky smile on our faces. If funk is your thing, and dirty funk at that, you may well be looking at the missing piece of your sound. We were suitably impressed with the quality of the overdriven sounds, although we would expect nothing less of an Ashdown product; the drive is warm and richly-coloured, and armed with a passive bass, fingerstyle and pick tones ring out.

Meanwhile, the funkier side of things certainly come to life once the wah switch is called into play. Your playing attack and technique also have much to do with the sonic results, but no matter how you play, this pedal is a full-on wah and filter fest.

Combining the drive and wah leads to some interesting sounds which, if used sparingly and tastefully, can give you a standout bass flavour for soloing and passages in a song where the bass is heavily featured.

Despite the slightly hefty pricetag, the quality of the sounds on offer will certainly appeal to a sizeable chunk of the bass fraternity. Check it out and enjoy!