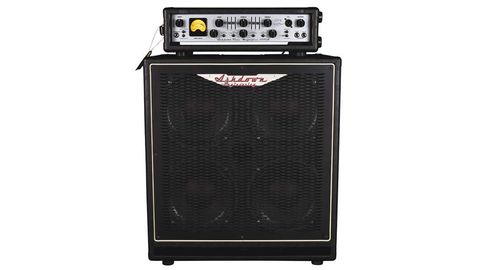 The exclusive Ashdown anniversary rig sounds as good as it looks.

The ABM EVO bass head has been at front and centre of the Ashdown range for the last 20 years.

That’s two decades of continuous manufacture and development, which is definitely worth celebrating. It’s a brilliant piece of design and engineering, and it looks pretty good too. This 20th anniversary version is truly a thing of beauty, with its anodised front panel and bespoke covering, embossed with a diamond stitched pattern and looking like the Beluga quilted leather seats in a new Bentley Continental.

Inside, it’s just as gorgeous, hand-wired and assembled at Ashdown’s workshop using the very best of everything. Every component from chip-holders to the complete steel chassis can be removed and repaired or replaced if something fails, although if the evidence of the last 20 years is anything to go by, it probably won’t.

Ashdown ABM amps have a reliability record that is second to none, which is one of the main reasons that they’re so popular with hire companies and bands that are constantly touring.

Although there’s much here that will be familiar to those who’ve used Ashdown amps before, the front panel and features have been improved and refined over the last two decades culminating in this, the fifth version.

The new variable valve drive preamp, which uses a 12AX7 valve for overdrive, and the new nine-band EQ keep the ABM 600 EVO amp contemporary.  There’s a pre-shape filter at the front end above a padded input for active instruments, and a large input gain control.

The trademark VU meter is next, followed by one of the best bass EQs ever; quick, accurate and musical. Originally designed to have just three controls (Bass, Middle and Treble), four graphic sliders were added in response to feedback from players who needed more control.

For the EVO IV, this has been refined further still and now you have a full nine bands of EQ adjustment. Beneath this are single-knob controls for Drive, which sends a portion of the signal through the valve preamp, Compression and of course the Sub-harmonic Generator, allowing you to subtly blend in a lower octave to your signal, adding weight and fullness without losing the integrity of your bass’s natural tone.

On the right hand side of the front panel are the DI outputs (balanced XLR and jack) with a pre/post EQ button and output mute. Finally, there’s a large output control for adjusting your stage level. Turning to the latest version of the 410H cab, this anniversary edition differs in a couple of ways, the most important being that it’s loaded with four high-quality Celestion 10” 200W speakers, as were the first 410H cabs built in the 90s.

The other striking difference is the posh cross-stitched covering, which is the same as the one used on the amp. Other than that, construction-wise this is pretty much the same as the standard ABM 410H cab - and that’s a very good thing.  There’s a solid 18mm birch ply construction, a tough steel grille, three recessed grab handles including one on the top edge, integrated wheels with a tough kick-plate for easy tilt-back movement, and a hi/lo adjustable high frequency compression driver. It’s a perfect match for the amp, both in terms of power handling and appearance.

We were able to try both amp and cab together at Ashdown HQ, and although we’d have liked to have kidnapped it, bundled it into our car and used it on stage, what we can promise is that in the studio it sounded very impressive.

The new preamp features on the EVO IV only add to the previous version’s impressive tonal range and versatility. In particular, the new gain stage means you can add subtle amounts of warm, natural overdrive (or demonic distortion if that’s your thing) without the need to juggle EQ, Input gain and Master volume levels.

The compressor is also effective, with no unnatural ‘pumping’, just a subtle smoothing-out of transients and a little added sustain as it increases.

Ashdown ABM amps have a distinctive sound, simultaneously traditional and bang up to date. There’s no unwanted circuit compression; it’s open, dynamic, uncoloured and if necessary very, very loud. In that sense it’s exactly what Mark Gooday set out to achieve 20 years ago, when the first ABM amps were designed - he wanted an amp that in terms of sound was somewhere between the vintage warmth of an SVT and the bright, solid, modern punch of the big SWR amps. We couldn’t have described it better myself.