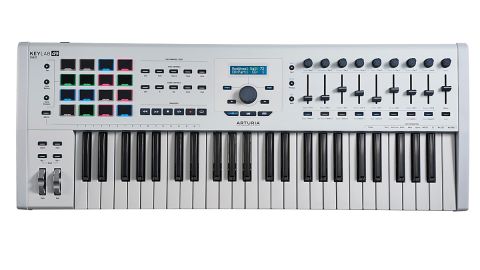 A premium quality keyboard and controller that manages rather successfully to deliver for both DAW and live hardware users alike.

KeyLab is Arturia’s flagship controller keyboard, and the new MkII has arrived in 49 and 61-key versions in black and white.

It’s the white 49-key model we have on review and, like the latest KeyLab Essential, the MkII’s keyboard and playback pads are bolstered by DAW transport, DAW commands, parameter entry and deep integration with Arturia’s bundled Analog Lab 3 software. Although similar in layout to the KeyLab Essential, the MkII is a very different unit with a higher pricetag and more upmarket feel.

The aluminium case feels robust and, although heavier than moulded plastic construction, is less bulky. It’s deep front to back (297mm) but the height profile is surprisingly low (53mm). The semi-weighted Pro-Feel keybed is fantastic (the same as the MatrixBrute synth), and delivers excellent sensitivity across the full range of velocities. The metal pitch and mod wheels are light and responsive and the keyboard includes aftertouch.

For connectivity the MkII builds on its predecessor, with five pedal connectors (sustain, expression and three assignable auxiliaries). Meanwhile MIDI in/out is now joined by five CV connections (pitch, gate, mod 1 and mod 2 and input), so you can both control your modular synths and also hook up one of their CV outputs to control something on your DAW. For power, KeyLab MkII uses USB or an external PSU (not included), however Arturia has included an anti-ground loop USB splitter, which allows simultaneous computer connectivity and power via a standard USB charger.

The clearly zoned top panel has 16 RGB touch and pressure- sensitive pads, and pads can also select or trigger chords (Chord Memory and Chord Transpose modes). There are six transport controls and ten DAW command buttons with nifty magnetic labelling overlays for Logic, Pro Tools, Studio One, Reaper, Ableton Live and Cubase. On the right of the top panel are encoders, sliders and buttons (nine of each) alongside three control (Bank) buttons and in User mode this provides an impressive three banks of assignable faders and encoders. Overall the buttons feel positive (with a reassuring click) and are backlit. One gripe, though, is the positioning of the encoders and sliders, which performers would probably prefer on the left.

KeyLab MkII is operationally intuitive with three distinct modes - DAW, Analog Lab and User (there are ten user configurable presets) - selected via dedicated mode buttons in the centre. In use the Analog Lab mode requires no setting up, while User mode is more open- ended, with full customisation of knobs, faders and buttons including button colours. Customisation is achieved either via Arturia’s MIDI Control Centre application, or using the onboard menu, and the latter emphasises KeyLab’s credentials as a standalone controller.

Overall the KeyLab MkII is an awesome controller keyboard that not only delivers fine playability, but also tackles DAW control and synth editing. Throw in CV capabilities and standalone operation and the price seems reasonably justified.