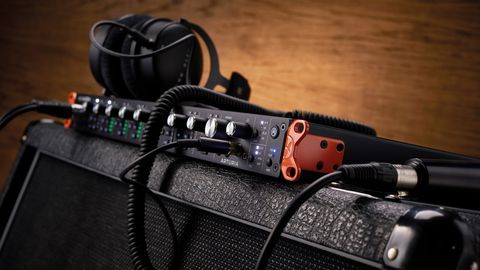 All in all, this is an excellent interface with some thoughtful touches. The included software makes it good value too.

The market for audio interfaces is fairly awash with options so it may surprise some to find Arturia releasing the AudioFuse 8Pre. However, this one hits above its weight in a couple of key areas.

First off is the physical object itself, which is a 1U unit which cleverly has rack-mount ears which can be mounted at 90 degrees, to provide a good desktop solution (raising the controls off the desk for easy access). It’s a solidly built device, housing eight channels of XLR/TRS inputs, two of which are on the front, with a switch for line-level instruments like guitars or basses.

The front panel also provides a single headphone out (shame there isn’t a pair here, especially at this price point, although there’s a loopback to your DAW which is a nice touch).

Each channel has its own LED meter, along with LEDs for input type, plus lit buttons for phase, range and phantom power (available on all channels), plus a nicely fi rm but responsive pot for input level.

A few standout design choices with actual practical benefit are the power jack which is threaded to prevent accidental outages, a world clock jack and USB3 port. The latter is a good choice as it’s becoming the standard; but for some users an adapter will be needed.

Onto the most important characteristic; the audio quality. Luckily Arturia has got this just right, with excellent gain ranges of up to 75dB and almost no distortion, (certainly, none that you can hear by ear). The preamps don’t appear to colour the tone in any noticeable way either, unlike some cheaper interfaces.

Another top feature of the 8pre is its implementation of ADAT, which allows the interface to be connected with other ADAT-enabled studio gear, keeping everything connected in sync. There’s a tell-tale LED on the front panel so you can see if you’re currently in ADAT or SUB mode.

Adding to the value, is the included software. The AudioFuse manager works as you’d expect, at least if connected by USB, but the real star of the show is AudioLab Lite, which showcases some of Arturia’s very capable recreations of vintage hardware like the Yamaha CS-80, the Minimoog and the Jupiter-8.

These instruments run in your DAW, have a huge tonal variety and will expand your arsenal significantly. Yes you’ll need to spend to unlock the full version but there’s a discount code included.

It’s this value, along with the quality of the hardware which makes the 8pre a very worthwhile interface for the small to medium home studio, or even recording on location, with the threaded power and adaptable rack ears. If you ever pushed the 8Pre to its limits it’s likely your host computer would have given up long before.

MusicRadar verdict: All in all, this is an excellent interface with some thoughtful touches. The included software makes it good value too.

"While it lacks some of its smaller sibling’s ‘everything in one box’ functionality, what it does provide is impeccably reliable and sounds fantastic."
Recording Mag

"In the 8Pre, Arturia has produced a much more focused product. It's aimed squarely at home and project-studio owners who want to make good-quality multitrack, multi-miked recordings without breaking the bank"
Sound on Sound