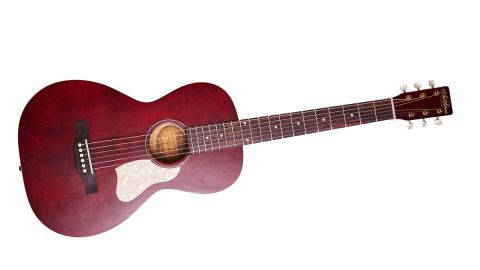 It’s got attack, projection, volume, character and style. And it’s only a parlour.

Let’s get straight to it - this Roadhouse Tennessee Red is a superb piece of musical craft.

Made by Art & Lutherie, a sub-brand of Godin Guitars (known mostly for its electric guitars) this parlour model cuts straight to the chase - it’s clean, it’s earthy, it’s got attack and its design takes you back in time to the rural deep south where all you might have needed were the clothes on your back and this instrument for company.

The original version of this guitar was electro-acoustic, featuring the Fishman Sonitone Preamp system, but through sheer popularity at the 2017 NAMM show, and the desire to have it at the lowest possible price, Art & Lutherie developed this model - void of electrics and with woods sourced predominantly from Canada’s own roots. The result is no less charming and equally  as tantalizing.

For some, the smaller parlour guitar may not be an option (owing to large hand sizes, or the nature of your guitar performance) but this guitar is the dream for all acoustic players who want to be on the move - from venue to venue, busking through to cosy lounge jamming.

For a start it looks like it’s meant for greatness. The Wild Cherry back and sides are a rich crimson. While this type of wood is hard and durable - used a lot for veneers and furniture (interestingly when burnt it gives off a sweet-scented smoke, though we won’t be testing that) here it has been triple laminated. What this means is that three pieces of the same Wild Cherry wood have been cut thin enough to be bent into shape without the need for heating and steaming.

The results are that you end up with a stiffer box, which has been concocted in a quicker production time, which in turn saves on cost. There is also less wastage making it a more eco-friendly specimen too. Those Canadians are just always so damn helpful.

Setting off the red sides, the circumference of the top is bound with a thick off-white band of plastic binding, which gives the guitar that authentic vintage vibe. The solid spruce top shows off some rubescent textures, uncommonly seen in such woods.

On further investigation, it transpires it has been stained to match the Wild Cherry back and sides. The top is also described as ‘select pressure tested’ so you can be assured that it is of good strength and rigidity while allowing maximum capacity for harmonic vibration. Protecting the top is a white purloid pickguard, shaped to match the contours of the lower bout, which contrasts perfectly with the red spruce top.

The neck is made from silver leaf maple, a variety indigenous to Canada. Originally the neck and headstock were one piece but the headstock was removed, shaped and reattached with the grain reversed - all with the intention of making a stable neck.

When playing the neck you certainly feel like it has the strength to support the angst of even the most cantankerous players. The headstock sports the Art & Lutherie logo and some dapper brass tuners, which have white pegs - a nice touch, keeping to the limited but stylish colour palette of red and white. Adjoined to the neck is a rosewood fingerboard decorated with standard position markers.

Playing this Roadhouse Tennessee Red is an absolute joy. The middle and upper ranges of the guitar are very strong. The bass less so, but this could be down to a string-related matter rather than any tonal resonance issues.

When we try some alternative tuning dropping the bottom E to a D opens up the bass no end.  Blues and country come to the fore. Suddenly we can see ourself as a Gerry Jolly, a Stu Phillips or even a Lindsay Ell (all Canadian Country music stars - but not necessarily all parlour guitar players).

There’s clarity too, combined with an understated subtle warmth. Owing to a lot of choral singing we have to practise my parts sightreading bass clef up onto the treble. We inevitably do this on guitars we review. On this parlour it’s an absolute pleasure. All the notes are clean. Melodies come out with a sincere, sweet definition, when played with fingerstyle over the high-end of the fingerboard. The size of the guitar means it’ll never compete with the vocals too.

The harsher blues and country sounds are there but you have to play them to get them - mostly between the soundhole and the rosewood bridge, and aided by Graphtech Tusq™ nut and saddle (a material designed to mimick bone). Playing by the bridge gives you plenty of attack with ample projection (for a parlour guitar). A plectrum helps too.

The strings are set at an optimum distance from the fingerboard so the right hand doesn’t feel cramped and has plenty of space for fingerstyle and strumming techniques. This also helps the left hand glide up and down the rosewood fretboard with such ease that it’s hard to imagine ever going back to even an ‘0’ model guitar.

Like the ukulele this Roadhouse Tennessee Red doesn’t require that much effort to be playing all over the guitar. The left hand, obviously, has a very easy time spanning the frets on this parlour compared to the larger six-stringed cousins.

Ever alert to the musician’s needs this guitar comes with a double action truss rod so you can alter this distance between the guitar and the strings to your acquired taste (or, in the more practical vein, to compensate for any under or over bowing). The guitar is like a pocket-sized bag of country rock‘n’roll - compact and ready to go at a moment’s notice.

This is to all intents and purposes exactly what Art & Lutherie had in mind - a model and series harking back to the sound of those old blues boxes but within an affordable budget of £369.

“Not many Southern Blues players could afford a D28 after all,” adds the UK 440 distribution company. There’s so much versatility in this instrument, it’s hard to stop playing it. The end-pin gives you opportunity to play the parlour on the move too.

We must confess we’ve been sold on this guitar and have decided to get one! We’d put it up there for best budget guitar 2017! If the red isn’t to your taste there’s a bourbon burst or faded black to choose from as well.  Plus it comes with a lightweight soft gig bag, which has arm-straps. “The kind of guitar I want to play is mean, mean licks,” said John Lee Hooker. This guitar can help you do that.