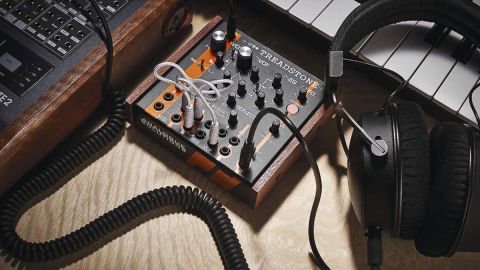 Despite some functional quirks, the Treadstone may be just what you’re after to add some analogue flavour to your setup.

UK synth stalwart Analogue Solutions is back with the latest instalment in the ‘SynthBlocks’ trilogy, the Treadstone ‘Analogue Synth and Sound Maker’.

These are small desktop units that sit somewhere between self-contained sound generator/processors and patchable modular-style building blocks. Treadstone (a Bourne novel reference) is the most knob/switch/ socket-laden of the SynthBlocks so far - a fact reflected in its higher price. We were expecting great things from this diminutive, but rugged, box.

In simple terms, Treadstone is a patchable single oscillator analogue synth with MIDI and CV control. Power is derived from the included 12V DC adapter and all external interfacing (including the MIDI input) is via 3.5mm jack sockets. Analogue Solutions provide adapters that convert the MIDI socket to a standard DIN connector and the Audio Out to a larger 1/4” socket. Plugging a keyboard or DAW MIDI output into the Treadstone gets things going, and after a quick read of the manual (to decipher the front panel graphics) we created some reassuringly analogue-sounding noises. Despite its apparent simplicity, basses, leads, drum hits and weird effects were all within its grasp - especially once you begin using the patchbay to create more complex types of modulation.

The MIDI input feeds a MIDI-CV converter that turns note-on/off data into control voltages for the VCO and EG section. The VCO consists of a combined sawtooth/square/pulse generator, with the final balance determined by a waveform mix control. Below this, there’s the switch for adding Noise or a Sub-Oscillator square wave (one octave down) to the pre-filter mix. Given the limited panel space, these are very much either on or off, with their relative levels to the main VCO non-adjustable.

Our feeling is that the sub generator might’ve been mixed a little lower in level, as it leads quite easily to distortion in the signal chain. You may love the drive this imparts to the sound, but note that there is no way to dial-back on this without turning-off the sub. We preferred the saturation created at higher filter resonance settings with only the main VCO in play, (though would have liked a choice on whether it was part of the sound).

The square wave’s pulse width can be modulated by the onboard envelope or LFO by accessing the dedicated PWM switch. When modulated here by the LFO, there is no control over the depth of modulation, and therefore it’s a bit frustrating to find that when the LFO passes through the extreme points of its cycle the sound disappears completely. However, this does result in Amplitude Modulation-like effects - useful for creating harsher tones.

The Treadstone filter is based on the classic SSM 2044 filter chip (now back in production) that could be found in Korg’s Polysix and Monopoly synths (among others). This is of the 24dB/octave low-pass variety and gives a satisfying bite. As stated above, pushing the resonance can saturate the circuitry (mainly at lower frequencies), though it cannot quite dive into self-oscillation. Beneath the main Filter Cutoff control are two smaller knobs for setting envelope and velocity modulation amounts.

With some patch cables and a little experimentation, the Treadstone’s sonic palette can be expanded considerably. Ins: External CV inputs for pitch (one via an attenuator), though ne adjustment is tricky. Duty – for modulating pulse width. External CVs for filter cutoff (one via attenuator which is very sensitive). Audio In. Clock In for the sequencer. EG Trig. Outs: Dedicated square wave VCO output. LFO square and triangle outs (good for vibrato and more controlled PWM). Envelope out - useful for creating pitch sweeps. MIDI Loop Sequencer: Despite its size, the Treadstone features a 16-note step sequencer. Tempo can be set via MIDI clock or incoming analogue clock, whilst notes are entered using MIDI note-on messages (with C#7 and C6 reserved for rests and ‘skips’ respectively).

The Envelope Generator is of the usual Analogue Solutions four-stage variety, with Attack, Sustain and a combined Decay/Release control. Under normal circumstances the EG is triggered by incoming MIDI notes, though the Treadstone also features a couple of self-contained trigger options. Drone mode mimics a note-on/gate signal, while LFO triggers the envelope in time with the LFO (similar to that on Roland’s classic SH-101). Both of these require the VCA that follows the filter to be controlled by the EG - though it also has a ‘Key’ mode which turns the amp envelope into a simple on/off affair.

The VCA can also be selectively bypassed for certain signals if required, allowing the noise or saw wave to be mixed with the filtered sound. Incidentally, the only LFO control on the synth determines its speed. It outputs both triangle and square waves, though these are only available separately via patchpoints. One issue, that is audible at higher pitches with the filter open, is the way in which the LFO modulates pitch very subtly at all times. You might put this down to the charm of ‘real’ analogue circuitry, but the signal bleed is there nonetheless.

The final processor in Treadstone’s armoury is a lo- digital echo similar to the one found on the AS Dr Strangelove. This is great addition, though I would have loved the feedback control to go a little further and allow in infinite/rising repeats.

Taken together, all the features mentioned above would make for a cool little synth, but its flexibility is massively expanded by the 12 patchpoints and built-in MIDI Loop Sequencer (see boxout). We had a lot of fun with the Treadstone, and it offers more potential than you might first imagine. It would make a nice addition to another synth or modular system (especially given the recent announcement of an upcoming Eurorack version).