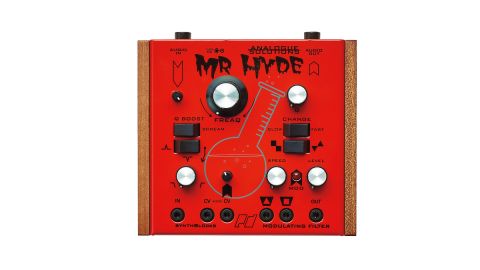 An excellent-sounding filter box with some good modulation and useful patching possibilities, but there are other options with more features and flexibility.

Analogue Solutions has been hard at work designing and building analogue music gear for nearly 25 years.

Predating the current analogue and modular revival, and with an ever-evolving product range, AS is known for producing analogue synths and drum modules that stick as close as possible to the principle of 100% analogue audio signal paths (and analogue LFOs and envelope generators).

It would be easy to dismiss it as a company stuck in the past, were it not for the fact that it was one of the earliest brands to embrace the Eurorack format.

Mr Hyde is the first in Analogue Solutions’ new series of ‘synthBlocks’.

These are small table-top units designed to be plugged into your production setup in multiple ways.

Although full-sized jack points can be found on the rear, the presence of multiple 3.5mm sockets on the front panel clearly indicate that they might equally be at home connected to a modular system. Mr Hyde comes as a solid-looking metal box with wooden end-panels (that make everything sound better as far as we’re concerned), and with power supplied by a 12V DC external PSU.

Gazing inside, you will find a neat PCB hosting predominantly surface-mount components. All switches and pots are soldered direct to the PCB, with the only case-bolted sockets being the main (rear) audio input and output. Although it would perhaps have been more robust to mount all front-panel elements to the case itself, they do feel solid (and repair would be a relatively simple task should problems arise in the future).

At its core, Mr Hyde is a pretty straightforward multimode filter plus modulating LFO combo. Audio enters the unit via the back or front panel sockets, though there’s no specific input priority so sources are combined with no effective buffering if both are used. A small pot then adjusts the input level.

The manual indicates that the input can be overdriven, so it was little disappointing to find that this pot appears to only attenuate the signal, and doesn’t provide the saturating gain boost itself. In fact, there is a loss of level though the unit, with only extreme filter resonance settings able to match the peak level of signals bypassing the unit. We wonder if a trick has been missed here? The addition of wide-ranging gain controls on the input and output might have expanded the dirt-generating capabilities of the unit further, and possibly allowed to it to interface with an even wider range of gear.

Next to the filter itself, which was initially tested in lowpass mode. Adjusting the filter cutoff (‘Freaq’) it’s clear from the off that this is a nice, rounded and warm-sounding filter. At lower Q settings it’s certainly tame, but push the resonance up a bit and the added bite comes into play, providing some excellent vintage character. At higher settings, the squelch begins to kick in without unduly thinning the core sound.

By default, a filter of this design will not self-oscillate at the highest resonance settings, but thankfully AS have provided a Q Boost switch that lets self-oscillation take hold. Although this ‘Scream’ feature adds the required extra resonance (at the top-most Q setting), self-oscillation only occurs in the last 5th of filter frequency control’s travel.

Low-pass filters are a mainstay of any subtractive synthesis system, allowing the spectral content of rich raw waveforms to be varied quickly and intuitively. Other types of analogue filtering are quite easily achievable - and many vintage polysynths offer a global high-pass filter to thin out the low-end, or even semi-independent HPF and LPF in the case of some vintage Yamaha synths - but it is perhaps less common to find multimode designs like the one on this new AS unit. Oberheim’s SEM module was one such example which, like Mr Hyde, features a sweepable 12dB/octave filter. SEM-style synths have been at the core of Analogue Solutions’ product catalogue for many years.

The high-pass filter works equally well, though the Notch setting (midway between HP and LP) is subtle, as you would expect. The results can be heard better on richer material with a wide frequency spread. Some form of output gain boost might have been helpful here also. The switch-enabled bandpass filter is very effective. It should, however, be added that the Q Boost does make things sound a little ‘scratchy’ when in Notch and HP modes.

If you want to go further than realtime manual tweaking, the built-in LFO allows you to modulate the filter cutoff with square or triangle waves. Depth and rate can be adjusted fully, with the ‘Change’ switch allowing you to choose form two LFO speed ranges. Fast settings can modulate at audio rates and create lots of great sideband nastiness (effectively a form of FM in self-oscillation mode).

Set to the Triangle LFO wave, more high frequencies are noticeable, while the Square wave introduces a formant- like filtering quality. We would like to have seen the addition of a stepped random/S&H shape for creating less predictable, ‘bubbly’ textures. The LFO MOD LED appears to be derived from the Triangle wave (quantised to either off or on status) which means modulation indication when the Square wave is selected appears out of phase. Maybe a variable brightness system (broadly indicating LFO strength) would have worked better.

The lower part of the front panel is devoted to minijack-based interfacing, and whilst this is very welcome, we can’t help but feel that even more could have been made of this – filter mode and LFO rate CV control for example. Nonetheless, the addition of these patch points makes connection to other gear, or the more complex modulation possibilities of a modular system, pretty easy.

Overall, this is solid filter modulation box coming from a manufacturer that has a strong analogue heritage.