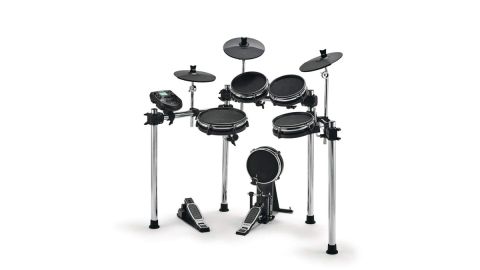 For the beginner through to intermediate drummer, the Surge is exactly what the doctor ordered. It’s a compact practice kit at a great price, with plenty of features to explore.

Both eight-piece, both mesh and both coming in at very competitive prices. Two months back we ran the rule over the Command mesh. Now, we’re taking a look at the cheaper of the two, the entry-level Surge Mesh.

The eight-piece kit consists of five mesh drum pads and three cymbal pads. The snare uses a larger 10" while the three toms are 8". Remarkably, all four drums are dual-trigger (head and rim), which is seldom the case at this low price point.

The kick tower also features an 8" pad which, despite the small footprint, actually feels reassuringly sturdy with the included Alesis bass drum pedal attached. The small cymbal pads are only single trigger, which means no separate ride bell or crash sounds. The ride and crash are choke-able though, which is a nice touch.

The compact four-post chrome rack is easy to assemble - although doesn’t use slotted poles like that of the higher-end Alesis frames - and holds everything perfectly in place with zero unwanted movement. The Surge module is identical to Alesis’ previous Nitro model, but it has been re-labelled to accompany the new kit. The small curved module features a 6cm LCD screen that uses a simple page navigation system to move between the main ‘song’, ‘kit’ and ‘voice’ menus, in addition to multiple training features, the utility menu and the inbuilt metronome.

The bottom section of the module has rubber buttons corresponding to each part of the kit, which are laid out in a typical drumset configuration for ease of use (they also light up when a pad is struck). This makes changing instruments or tweaking settings super-fast. The module has the capacity for 40 kits, which break down into 24 out-of-the-box presets and 16 user kits.

There are a total of 385 individual instruments to play with, which range from various styles of drum kit, to percussion, electronic sounds and sound effects such as DJ scratches. The module also houses 60 inbuilt MIDI sequenced backing tracks, which can be played with or without the original drum track.

Connectivity includes mini-jack headphone out and auxiliary in, left and right ¼" master outs and MIDI in/out via five-pin and USB connections. The included mesh pads connect via the supplied 25-pin cable loom and there are two additional jack inputs for a fourth tom and an extra cymbal.

Getting to grips with the module doesn’t take long because the layout is so straight forward. The downside is that the kits and sounds are numbered rather than named, so it can be tricky to find what you’re looking for without memorising each one. The kit performs well out of the box with no need to fiddle with trigger settings like sensitivity and threshold.

After a small amount of mixing (mostly turning the cymbals way down), the kit balance sounds good and every note is complemented by the feel of the mesh heads. The hi-hat pad had a little too much movement for our liking but this was easily rectified by adding an extra felt to hold it in a more secure position. The selection of kit patches is decent, although there are a few, let’s say less inspiring, choices - particularly the toms on the jazz-style kits.

The dual-zone pads bring an extra element to performance and enable drummers to assign additional percussion and effects. As mentioned previously, it’s a real shame that the same cannot be applied to the single-zone cymbals, but it’s understandable that a few sacrifices must be made at this price. The inbuilt tracks are a mixed bag of styles and absolutely MIDI-tastic!

There are some really addictive grooves and interesting phrases that make practising great fun at any tempo. It’s worth noting that when scrolling through the tracklist the kit selection automatically changes with it. That means going back into the kit menu and changing it manually should you wish to keep the same kit - a mildly irksome feature when you’ve just spent ages slaving over a custom kit.

Dynamic expression is slightly limited but playability is plenty good enough for a beginner through to intermediate drummer. The hi-hat pedal response is basic. There is a half-open option, although it’s not the most natural, whilst splashing the hi-hat proves a little too much for the module and produces some unwanted triggering.

The wealth of learning features (like the metronome that tells you how good your time is) make great tools for budding drummers, and with everything included except a throne, the Surge represents a worthy first drum kit purchase, which also promises to keep the neighbours happy.