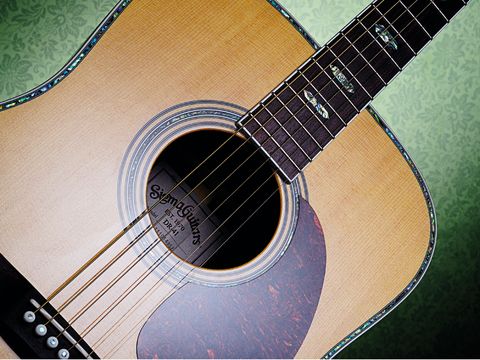 A fine, classy-looking dreadnought with excellent sound and playability to boot.

Sigma guitars from the '70s, when the brand was launched by Martin to compete with Japanese manaufacturers, remain sought after to this day.

Precious few ever make it to the second-hand market and a simple Google search for Sigma Guitars turns up a whole array of websites, communities and fan sites. But now the marque, which was withdrawn in 2007, has been given new life after being purchased by AMI, a German-based distributor of high-end acoustic and classical guitars.

Completing something of a complicated circle, Martin Guitars' UK distributor, Westside Distribution, is now importing Sigma Guitars into the UK. The Sigma catalogue has four ranges: the 1-series, the all-mahogany 15-series, plus the Standard and Vintage series.

The DR-41, from the Standard series, is adorned with generous ornamentation as featured within the soundhole rosette, the top's edging and hexagon-shaped fretboard markers. A tortoiseshell pickguard lifts the guitar's appearance too, as does the white binding that's applied to the fingerboard and headstock. The gold-plated Grover tuners also play their part in making the DR-41 an altogether posher-looking guitar than its stablemate the DR-28.

The DR-41's bookmatched soundboard has some nice contrasts in hue, though there is evidence of some scarring in places, particularly above the soundhole. While it's generally accepted that such inconsistencies in the grain have no detrimental effect on the guitar's tone, some might be put off by the lack of uniformity while others will embrace it as making the guitar unique.

Perhaps the most striking feature of the DR-41 is the two-piece laminate rosewood back. It boasts a gorgeous top layer displaying a luxuriant grain pattern, which in turn is set off with a herringbone-style centre stripe. Lovers of wood will be drawn to such a guitar for its looks and tonewood selection.

The DR-41 gives further evidence of Sigma's high standard of build quality, finish and presentation. Inside, the guitar is spotless, every joint is clean and tight and while the gloss finish is perhaps a little over enthusiastic, it's consistent.

The fretwork is excellent too and the DR-41 benefits from a first-rate set-up. The slim 'C' profile neck is substantial enough for grip, but not so full that it inhibits barre chords higher up the neck. It's very comfortable and non-taxing to play: the slim profile, good action and matte finish aid swift travel around the fretboard.

The quoted nut width of 42.86mm (1.69 inches) is as you'd find on a standard Martin dreadnought and while perhaps not best suited to fingerstyle playing, it is a happy medium for the cross-genre guitarist.

Striking out first position chords we are impressed with the DR-41's sound. Producing what will perhaps become a signature sound for these Sigmas, the DR-41's timbre is like that of the DR-28: plump, lush and full. In short, it's a fine-sounding instrument.

And you can't change history. Sigma used to be Martin-owned and this Sigma is undeniably Martin-like. Be it the headstock shape, the logo design, the shape of the bridge or the dimensions, everything shouts Martin.

Still, our Sigma review model stands up to scrutiny in its own right. For the money it's superbly built with good quality materials and sounds fantastic - irrespective of their heritage and inspiration.

If you can't afford the real thing but still hanker after a classic-styled dreadnought, add Sigma to your must-try list.