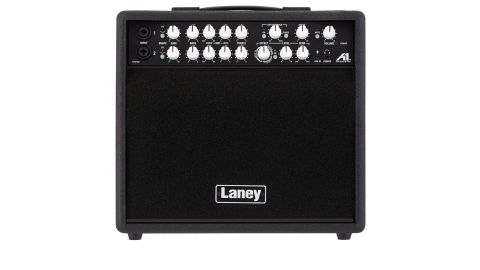 Compelling performance and a competitive price make this a no-brainer acoustic amp choice.

An acoustic amp may seem like an unnecessary luxury for many players, but Laney's Far East-built, affordable A1+ could well force you to have a re-think.

Laney's smart black design is certainly contemporary, and its front-mounted control panel and handy upright or tilted back cabinet design sets it out as unique.

The proprietary TuffStuff coating really does take the knocks, while the eight- inch bass driver and one-inch dome tweeter are protected by a metal grille behind the foam front. That's good news, as there's no carry bag included.

Practicalities are completed with an integral pole mount, so it can sit comfortably on a standard speaker stand, and while 12.5kg is reassuringly weighty for such a small box, it's more than manageable as a one-handed carry.

The amp offers two identical, independent channels, with a whole heap of tone-shaping ability on board. Combi jack/XLR inputs mean you can use a microphone in either channel, while channel two has switchable phantom power for use with mics that need it.

There's also a global tone switch - dubbed 'shape' - which offers a relatively more mid-scooped/more hi-fi-like sounding option. One or the other position will more readily suit your particular guitar and pickup choice: there's no 'right' setting.

In addition, the A1+ has a powerful and tweakable EQ - including a 200Hz to 9kHz parametric mid - which does enable some extra control over the main 'speaking' voice of your guitar. Equally useful is the Laney's anti-feedback section, that's aimed directly at body resonance-type feedback.

If you've ever played loud with an electro-acoustic guitar, you will have suffered this, so Laney has tuned the feedback killer over a wide range from 30 to 3kHz to give you the best chance of getting it under control: it works, too. Before engaging it, we'd recommend trying the phase switch, which can be an instant solution for certain feedback types.

Finally, there's a mute switch on the front panel, plus an effects section, headphone socket, auxiliary input, tuner out, line out and effects loop, and of course the all-important XLR DI output.

We tried systems including the Taylor ES, Fishman F1 Aura+, K&K Pure Mini and Fishman Rare Earth Blend and it's immediately obvious that the Laney A1+'s ambitions and performance are a long way north of its price point.

The parametric mid proves its worth with the K&K Pure Mini (in its host Collings CJ35), for example; a dominant colour around 800Hz to 1KHz is easily tamed, while the Taylor has a bit of a nasal envelope just above that. The Laney tunes it all well.

Switching to the far more ubiquitous Fishman under-saddle and blend systems is less of a challenge. The dual channels enable you to deal with a split signal from a dual-source system, but again the Laney's involved EQ enables you to tweak things more exactly.

Volume-wise, it sounds pretty good up to the edge of its abilities - enough for small bar sound reinforcement and backline in small-ish bands . The onboard digital effects, for their part, are useful for a bit of ambience, but don't have the depth and sonic sophistication of those in the likes of AER amps, especially when it comes to reverbs.

Acoustic amps are hardly very sexy, tending to be more often a slightly reluctant, needs-based purchase rather than something driven by want or desire. However, that's a crazy situation if you're a performing musician who uses an electro-acoustic guitar, because a good acoustic amp can transform your tonal world, and can increase your enjoyment of performing exponentially as a result.

Laney's A1+ is an absolute value-for-money no-brainer: good sounds, versatile controls and a feature set that makes it a superb companion as electro- acoustic backline, or indeed guitar and vocals sound reinforcement for small bars and cafés.