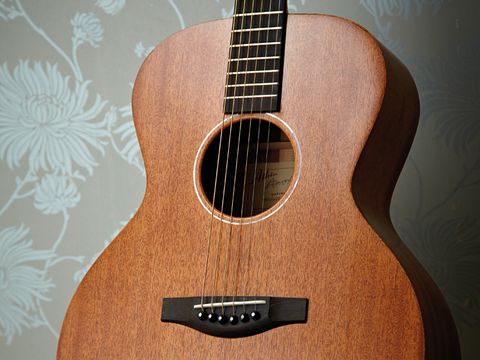 Puts a fine gloss on the all-mahogany genre, with great style.

Since going full-time in 1995, Canterbury-based luthier Alister Atkin has become one of the UK's most highly regarded acoustic makers, and his 2012 has got off to a heady start.

Last year, Atkin was one of two UK luthiers (the other being Mick Johnson) to be commissioned by The Buddy Holly Guitar Foundation to make two of 28 recreations of Holly's 1943 Gibson J-45, which would then be loaned long-term to well-known musicians to help raise funds for charitable organisations. Since then, he's actually made six of the instruments, for the likes of Sharleen Spiteri, Albert Lee, Mick Jones and Phil Everly.

Alister's catalogue, meanwhile, has gone into overdrive, with a wealth of new body shapes and materials being offered. But the most intriguing new additions to the roster are the AM Specials, available in all seven of his body styles, from which we have an AA size for this review.

At 15 inches wide, the AA has a similar body span and depth to Atkin's Martin-influenced OM, but the shoulders and lower bouts are subtly more rounded in their profile, lending an appearance more akin to a scaled-down small jumbo than a conventional 000 or OM. As the initials suggest, the AMs have an all-mahogany build, but rather than follow Martin's no-frills, no binding route seen on its 15 Series, the guitars are gloss lacquered (in nitrocellulose) with matching mahogany body binding.

The latter may seem a trivial point, but the binding provides a more precise definition around the body's perimeters than simply relying on the edge grain of the top and back to demarcate the adjacent rims. Elsewhere, the trim is purposefully restrained, achieving a clean, simple elegance with detailing such as a narrow pearl soundhole ring, ebony headstock and heel cappings, and a counter-grained mahogany fillet across the endblock.

Buffing of the lacquer is immaculate and, judging by grain reflections against the light, it's not too thickly applied. The guitar's internals are clean as a whistle.

Topped by a surefooted, aesthetically sympathetic set of nickel-plated Grover Sta-Tites, the 645mm-scale low-gloss neck is one-piece mahogany, secured using Atkin's usual Collings-style bolting system. Fretting along the bound ebony fingerboard is impeccably polished, while the near-flat radius will allow as low an action as you could wish for. There are no front position markers but the crucial side dots are there.

General dimensions are mainstream, starting at 43mm across the bone nut, with a slick, snug, moderate-depth 'C' profile that has just the merest hint of V'ing along the crown. Bridge string spacing is an all-purpose 55mm, making fingerstyle an easy proposition as things stand.

Should you favour a more overt picker configuration, however, Atkin offers a no-cost option of one that's 45mm at the nut, with 57mm bridge spacing. If required he'll also fit, gratis, a strap button at the heel, which isn't part of the standard spec.

All-mahogany acoustics can sound dry, but this AA comes with an infusing, open-voiced warmth built in, contributing to pleasingly sweet-edged highs and sustain. Fresh off the production bench during early March's cold snap, its dynamics sounded a tad tight, but with not much playing in required, this aspect is blossoming, revealing a responsive, rounded low end that doesn't compromise the clarity and definition expected from a guitar of this size.

There's a timeless, vintage-like demeanour to this AM Special that greatly impresses and attracts. It's not a flash instrument but it definitely shines - both literally and metaphorically - where it needs to.

It looks and plays the business in AA form, and doubtless will do likewise, whichever Atkin body style takes your fancy.