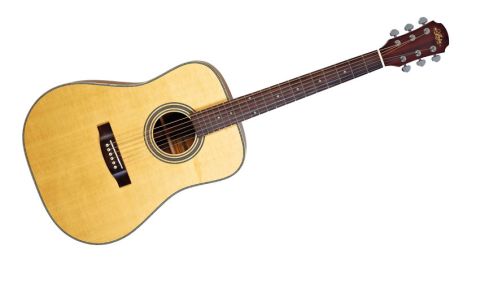 While the 511 is not without fault, it's hard to criticise such a considered and realistically priced instrument. Aria has made a very convincing guitar that holds up to scrutiny where it counts.

The trend for realistically priced solid-wood guitars has to be applauded. Increasingly, manufacturers are making genuine attempts to produce quality instruments with longevity and affordability in mind, not to mention sound.

Now, Aria has entered the market with an all-solid-wood dreadnought and an OM, with a choice of mahogany (£499) or rosewood (£539) back and sides, targeting the serious student market with enticing attention to detail and tempting prices, which include a decent hard case.

Here we have the mahogany 511 dreadnought, which features a good-looking Sitka spruce top, paired here with solid Indonesian mahogany back and sides, all coated with a high-gloss finish that really brings out the figure of the woods. From the quarter-sawn internal 'X' bracing to the eye-catching black and white herringbone purfling and rosette, this guitar certainly looks the part - but how does it play?

Well, the neck feels sturdy, when the profile has a slightly deeper U shape than you might expect. It really responds to energy: while fingerpicking, you can dig right in and the string spacing feels so natural that pulling and slapping is a breeze, and it never sounds too clangy. The sustain is barely blunted by full barre chords, and there's a low-mid grunt to the sound, which lends a satisfying punch to big rhythm parts.

Strumming from down near the bridge and on up to the base of the fingerboard, you really appreciate the harmonic content change from bright to mellow. Intonation is accurate enough to allow fretting up at the dusty end, alongside ringing open strings.

Detuning to low C, the 511 possesses a convincing sound for fingerpicked parts and retains its reliable intonation. The compensated bone saddle and nut are rarely seen at this price, and they pay off - this guitar definitely punches above its price tag.

Not all dreadnoughts are quite as comfortable picked as they are strummed. But that's where this one scores, too: strum it for big and bold rhythm parts; fingerpick it to reveal a more delicate character.

It's not all good, though. There is a buzz or two while using a capo, and overall, the action could come down. Finish-wise, our sample shows signs of glue where the heel meets the body and where the fingerboard joins the top, while there's a slight roughness to the satin finish on the guitar's heel, too. But these are relatively small issues, and are almost reassuring in a way - there has to be something to separate this guitar from its bigger-ticket equivalents!

While the 511 is not without fault, it's hard to criticise such a considered and realistically priced instrument. Aria has made a very convincing guitar that holds up to scrutiny where it counts.