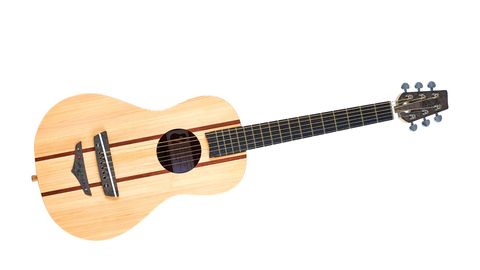 An excellent solution to the ‘travelling acoustic’ problem.

Wiltshire-based luthier Felix Byrne, operating as Acoustic Guitar Innovation, is clearly a man with a vision when it comes to creating travel guitars.

You don’t need to be a structural engineer to appreciate how difficult it must be to design and build a guitar that does the following things: 1) Folds up into a space the same size as, or smaller than, the dimensions accepted by airlines as hand luggage; 2) Performs said folding (and unfolding) in a relatively easy manner that won’t break the strings or trigger any other sources of massive stress for the owner; 3) Looks, and definitely sounds, like a decent acoustic guitar that can be sold at an appropriate price point.

Rather Felix than us - but by jingo, he’s pulled it off with the Parlour 13. Even though it comes in at less than £600, this instrument crams in features for which certain other luthiers would charge four figures. What’s more, it’s a hand-built guitar, made in the UK: no imports-derived savings here.

Essentially, what we’ve got here is a parlour-sized acoustic with an unusual neck and an even more unusual bridge, both of which we’ll come to in a moment. The neck joint is the crux of the instrument’s functionality, allowing the neck and body to separate and be stowed in any reasonable-sized case.

The Parlour 13 comes in a soft but sturdy gigbag with full instructions and a set of spare strings. It’s a small guitar, with a maximum depth of 98mm and a body that measures 460mm by 328mm at maximum, although the neck scale is a standard-ish 25.24 inches (in old money); a 23.85 inch scale is also available on request.

In fact the neck and headstock are the weightiest part of the instrument, which weighs in around 4lb and which suffers from a balance bias at the head end for obvious reasons. Add a strap and most of this goes away, though. Eco-friendliness is clearly at the top of the AGI agenda, with the top of our review model made of a spruce and walnut sandwich.

The former has been reclaimed from an old painting stretcher, a device which tautens artists’ canvases, and the latter from a mid-twentieth century wardrobe. Now that’s upcycling. The same walnut goes into the neck, as does a strip of aluminium (hence its weight), and the other woods are mostly HDF (high-density fibreboard), with or without a high-pressure laminate coating for durability.

You have plenty of other options when it comes to the body woods, though, with AGI suggesting oak, elm, spruce, Douglas fir, walnut, beech and sycamore for the top, singly or in combination.  Before we do the magic trick of taking the Parlour 13 apart and then reassembling it - a task which makes us a bit nervous, if we’re honest - let’s see how it stands up as a ‘normal’ guitar.

The headstock bias mentioned above isn’t really an issue, but you may well be a touch unnerved by the feel of the neck you first time you tackle it. This is partly to do with the aluminium strip running down the back, which obviously feels different to the surrounding walnut in texture and temperature, but also to do with its unusual profile.

Where a standard guitar neck might have a C or a D profile, this one has what resembles a lower-case ‘m’ profile, with a couple of soft ridges running parallel to that central metal strip. This doesn’t render the guitar difficult to play by any means, it just takes a minute to get used to the feel.

The other point of major interest is the bridge, a beautifully elegant unit that makes you realise how much bridge pins tend to clutter up the top of any guitar. The through-bridge design tucks the string ends out of sight, apparently transferring most of the job of adjusting the action to the allen-key sockets at either end of the body - another unusual, but effective solution.

When we tweaked said sockets with the supplied allen key, it took no more than a few seconds to arrive at the action we were looking for. The volume is surprisingly loud for such a small guitar, making the Parlour 13 feel suitable for use in small gatherings with no need for internal electronics (a range of which are available on request, AGI tell us). The tone range is excellent too, with biting upper mids and top, plus a bottom end that is bigger than you’d expect.

Of course, if you were after a massive bass tone you probably wouldn’t be investigating a parlour-sized guitar in the first place, but bear in mind anyway that the most prominent tones here are towards the top end.

We’re satisfied that the Parlour 13 sounds and plays great in its assembled state, in other words before we apply our sausage fingers to its innards: so far, so good. It’s time to take it apart, though, so we find a suitably unrisky surface to place the guitar on and stand well clear to survey the area. No large pieces of furniture nearby, which might trap a dropped component underneath them?

Any small children or pets around who might decide that eating an allen key is a great idea? No gratings, drains or other holes in the ground which might suck in an expensive bit of Parlour 13? No, so stop procrastinating...

First off, detune all the strings by eight turns or so. This means they’ll be slack, but not falling all over the place. Bear in mind that plenty of tuning up and down is part and parcel of the travel-guitar experience, so keep a tuner and/or roadie handy. Then unscrew the two prominent wooden dowels at either end of the body, remembering to store them somewhere safe (lose one, and it’s game over, pal).

Now the tricky bit: folding the neck up and out of the body. This takes a good few minutes for us to achieve, partly because the two sections grip together like a vice - as indeed they should - but also because we’re afraid that we’ll break something if we try to pull the neck and body apart too hard. It turns out that we needn’t have worried, as the parts are apparently tough as nails: after a lot of pressure here and there, the neck lifts swiftly and smoothly out of the body.

You find yourself in an unusual position here, holding a heavy neck and headstock in one hand, attached to a guitar body by six strings that you don’t want to break - so tread carefully. The next step is to detach the headstock from the neck, which is easy, and then to place the neck to one side.

Assuming you’re about to get on a plane, stow the neck in a suitcase for the hold, as customs staff are unlikely to let you take a heavy chunk of metal and walnut on board. Stuff the body with your underwear, tuck the headstock into a safe place in your carry-on bag and you’re set to go.

AGI recommends that you remove the strings entirely before you fly, which sounds sensible. At your destination, reverse the process. This is much easier, although - like us - you may find that the strings want to occupy the wrong nut slots when you put the guitar back together, resulting in bad language. Adjust the action and that’s it. We’re impressed.

So who needs this guitar? Travelling acoustic musicians, of course. Whether anyone else will bother is a moot point, but the Parlour 13 is a value-packed instrument at this price point - so if you do decide to think outside the box, we don’t think you’ll regret it.