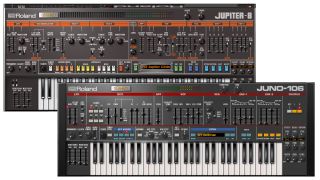 The Roland Cloud platform - which enables you to access plugins and other services on a subscripton basis - has flown slightly under the radar up to now, which is possibly intentional given that it’s still in beta. However, the version 4.0 release (things are moving pretty quickly, it seems) looks set to raise its profile considerably, as it brings a couple of classic Roland synths to the party.

Forming part of the new Legendary series, you can now download VST/AU versions of Roland’s coveted Jupiter-8 and Juno-106 synths, both of which are designed to look and sound like their hardware counterparts. They’re both powered by Roland’s Analog Circuit Behavior technology, and come in VST/AU formats for PC and Mac.

As a further bonus, a plugin version of Roland’s recently-released System-8 synth has also been added to the Cloud.

If you want to try these and other instruments, you can sign up for a free one-month trial as part of the early access beta program; the regular price is set to be $19.95 a month. Find out more on the Roland Cloud website.