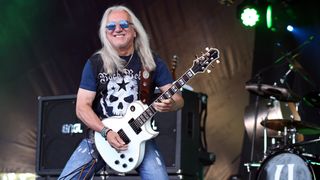 Almost five decades since forming, Uriah Heep have become one of the most veteran bands in rock ’n’ roll.

London-born guitarist Mick Box started the band in his teens, and now at the grand age of 71, he shows no sign of retiring – in fact, his band have just put the finishing touches to their 25th full-length, titled Living The Dream.

Those words are most certainly indicative of his life in music: his office being the multitude of stages the British originals have graced around the world and his main tool of the trade being the instrument held in his hands.

“Music has served me well,” he smiles. “It’s a passion I’ve always had, which I still carry to this day. It’s what drives me to keep on doing this. When the old rock bands like Sabbath, Purple, Zeppelin and us were getting started in the early-'70s, we didn’t know we were writing the book at the time… it was more like get your heads down and go for it!

“Years later, we found that our wave of bands had inspired so many others, and in all honesty it doesn’t get better than that. The greatest compliment you can ever have is when someone comes up to you and says that you’re the person that inspired them to play. That’s the ultimate accolade you can have.”

As he prepares for another world tour around the September release, with one eye on their fast-approaching 50th anniversary, Mick Box looks back on his long road through rock ’n’ roll and why he’s never stopped living the dream…

What were your earliest influences as a guitarist?

“I was into the jazzy things like Les Paul and Mary Ford, Django Reinhardt, Wes Montgomery, Tal Farlow and Barney Kessel. I was very much in that mould because my first teacher was the second guitarist for Django Reinhardt out in France!

“He was an English guy whose teachings were jazz-influenced from the beginning, so that’s where my first love came from and then I grew into the rock thing as it progressed in London, going away from the sweet 60s with beautiful choruses to full-on Marshall stacks! I got caught up in all that, haha!”

Speaking of amplifier stacks, we saw you had switched to Engl not too long ago. How did that come about?

“I’ve been with them for a couple of years now - they make superb equipment. It was actually my first time using them in the studio and they passed with flying colours, they were wonderful. I’ve got an Artist Edition 100-Watt head and an Invader 2 with the four channels.

“Funnily enough, it was Richie Faulkner from Judas Priest who I talked to about the Engl amps. He spoke very highly of them and said they were not only great amps and speakers, but very reliable, too. Being on tour through 61 countries like them, we need that same consistency.

“They ended up bringing a bunch of stuff to one of our shows in Germany, every combination, and said, ‘Play through the lot and see what you like.’ Between those amps, with a 4X12, I was flying… stick a Jim Dunlop Cry Baby wah in there and it was a match made in heaven. I kept it quite simplistic.”

“The wah has become part of my signature sound. I use it more as an expression pedal than wah, to be honest. When I bend a note up, I might put my foot down and it helps it cut through… if they made a pair of shoes with a wah-wah on them, I’d probably never take them off! I’d be wah-ing all over the place.

“To be honest, I first heard that kind of sound on Jeff Beck’s Truth album. He made the guitar talk and it made me realise how you can talk the guitar to new level with exciting sounds. I got one and have kept it ever since.”

And what guitars are we hearing on the new album?

“Guitar-wise, there were a few I used. I have a black S4 Carparelli, which has the whammy bar you can hear on some of the solos, there’s a tobacco sunburst Les Paul from the '70s that’s always served me well, plus a few Black Beautys, a Hofner semi-acoustic thing, which was great for arpeggios.

“I picked up an Epiphone 12-string in America years ago to match the Les Pauls, but I never used it. This time, I pulled it out of my cupboard and thought, ‘This is nice!’ It’s always a bit of a discovery, digging around and thinking, ‘Why not try that this time?’”

The first track on the new album, Grazed By Heaven, was written by bassist Davey Rimmer and Sons Of Apollo singer Jeff Scott Soto, rather than you and keyboardist Phil Lanzon…

“Dave came in as a fan of the band, so he wrote from that standpoint. He wanted the energy of Between Two Worlds and Wake The Sleeper’s title track. He did that very well – when you listen to the music, you can see he accomplished that wonderfully. We were very pleased with that.

“Although Phil and myself do all the writing, if anybody brings something in we’re more than open to it. When you join a band, you have to come in and take on what the band are known for.

“Dave’s been very respectful of our previous bass players; he always saw it as big shoes to fill. People have really admired that, how he’s remained faithful to a lot of the basslines in place while also adding in his own dimension. Plus he brought in a bit more stagecraft and looks great, but most importantly he fits in with our sense of humour. He was perfect in every way.”

There’s always been a lot more to Uriah Heep that straight rock, with a lot of progressive influences thrown into the mix, too…

“If you look at [fifth album] The Magician’s Birthday, that was quite progressive. Same goes for Paradise/The Spell… we’ve always had that element in our makeup. Even if you go back to the early days, like the title track from [second album] Salisbury with a 27-piece brass section and long guitar solos, it was all very progressive.

“We’ve always had that element to our songwriting – sometimes when you’re making music, you have to let things grow in the direction they want to rather than sticking to verse/chorus/bridge formats. Even on this new album, where you hear Rocks In The Road and It’s All Been Said, you can tell those two songs evolved in that same kind of way.”

You’ve always been the sole guitar player in the band. What’s the secret to sounding thick enough to cover it all yourself?

“One of the secrets is that we use keys with guitar for harmonies. It was tempting for me to do it all on guitar, but then it would be less of a Heep sound. The twin-lead stuff tends to be me and [keyboardist] Phil Lanzon together,- he’s such a good player that he can adapt to guitar thinking… once I’ve shown him it!

“Also, it comes down to the registers –  guitars can get very muddy, but if you allow separation, things can get bigger and fatter. That’s our main secret, not to get in each other’s way!"

“It’s important for people to be able to sing along to the instrumental parts. Originally I hear them as a chant in a live situation, with the whole crowd singing along.

“When we played Sweden Rock this summer, they sang the riffs to July Morning and Lady In Black louder than the band… which was amazing. It’s an amazing feeling when the crowd pick up on riffs like that!”

What’s the main secret behind your approach on guitar?

“Throw away all your scales. I’ve never done any of that stuff in my life; I only use my ears. I’ve also got smallish hands, I can’t do the spreads other guitarists do. You look at a guy like Paul Gilbert - he has longer fingers than I have legs! So I have to embrace my own abilities to find my style; that’s what makes me distinct, I think.

“I try to stay away from the scales and just go with my heart. You go with what fits the song, and I hear so many guitar solos these days that don’t fit the music underneath - where the guitarist isn’t listening to anything else that’s going on. I find that very frustrating because the song should always be the most important thing.

“Personally, I just noodle around until something fits, and then I shelve it until we are in the studio with the tape running. I try to keep it loose.”

Have you ever been given any advice that changed the way you look at your instrument?

“I don’t think I’ve ever received any advice. People probably tend to look at us and think we’re doing all right! But if I was to give advice, I would say find the individuality in what you do.

“Going back to the old days, I didn’t play like Blackmore, he didn’t play like Iommi… all the musicians were very individual. The sum of those parts gave each band their own flavour and sound. Nowadays, people go to a music college and come out two years later playing fantastically, but all sounding the same. There’s no attention to the individual characteristics, and I’m afraid there’ aren’t many individuals around these days. You can pick Paul Kossoff from Free a mile away, same with Blackmore or Page.

“Nowadays, a lot of players seem to have followed the same path… I find that’s missing in today’s music. The same goes for vocalists – Ronnie James Dio had an amazing voice while Ozzy didn’t have the greatest voice but you always knew it was him. Sometimes that’s worth more than a great voice. It suited the music and was his own vehicle.”

Finally, 25 albums in… what do you see in the future of the Heep?

“As long as we have our health, we’ll be out there doing it. This is our love, our passion and where we want to be. I’ve always said a working band is a happy band, and doing 150 shows a year across 61 countries… this is definitely a happy band. We’re doing what we love and we have no reason to stop.

“There’s an amazing amount of touring to do when the new album comes out - from Europe to the US and Australia, Japan, South America. Also, of course, we’re only a few years off our 50th anniversary, which will be a real milestone for us, so there’s all of that to look forward to. And a lot to be thankful for… and yes, we are living the dream!”

Living The Dream is out on 14 September via Frontiers Records.