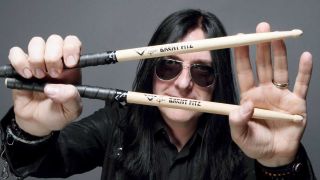 “There’s nothing worse than me knowing that a head could break or cymbals, pedals, sticks. We’ve been a little more attentive to check the cymbals and make sure none of them are looking fatigued.”

It’s reassuring to hear Brent Fitz tell us that even after all of the huge gigs that he has played over the years (including some absolute whoppers in his nine-year stint with Slash and co), the nerves are still there rumbling around inside.

“If you really care and you’re passionate, there will be things that get to you. The idea is that the more you do it you would think that it just gets easy; it doesn’t. The nerves are always there.

“I talk to Slash about this. We both go, ‘Man, I was nervous tonight’. Being nervous is the best thing because if you’re complacent and you don’t care, it will show and it will be a lacklustre performance.

And opportunities keep on coming, with Download festival looming. “Download always stands out on the calendar just like being in London sticks out as a special night,” Brent says.

“Even though I’ve played it several times before, it never gets to be, ‘Oh, we’re playing Download today’. No, it is big.

“It’s a big, respectful place to be on stage in front of a big audience. I’m a kid from small-town Canada and all the monumental events that have happened because of making music for me are just great.

“To play somewhere once is fantastic; to get to come back and do Download several times, that is the ultimate gift. Every time I think, ‘I can’t believe that I get to do this’.”

“I was 10 years old, it was 1980. My parents brought me to a drum teacher in town after they had seen myself and the kids in the neighbourhood do these concerts in my parents’ basement to KISS records.

“We would dress up as KISS and play along. During these concerts I made my own drum kit from a Muppets toy kit I had gotten years previously. I had modified it to look more like a KISS Alive II kit.

“My parents saw then that I was interested in drums but I had played piano ever since I was five so they were like, ‘Look, if we get you into drums you have to stay with piano’.

“So they took me to a teacher, put me at a kit and asked him if he thought I had any kind of drumming ability. The teacher heard me play and said I had great ability so my parents bought me a kit that day.

“It was a Yamaha Silver Sparkle double bass kit. The two bass drums were different sizes, a 22" and a 24". I never really ended up using both bass drums because a lot of my drum heroes had a simple one kick drum kit.”

KISS were a huge inspiration to you and you’ve since gone onto work with Gene Simmons, as well as Bruce Kulick. Were you concerned about the old adage of never meeting your heroes?

“To one day get to work with the people that inspired you to have a career in music is full circle and is one of the most satisfying aspects of what I have done in my career. Playing with Bruce Kulick was my introduction to the KISS family and we still have a close musical relationship.

“I was asked in a very nice way if I would like to do some solo dates with Gene; what’s the answer? The answer is, ‘Of course’! To get a phone call to play with Gene is a blessing.”

You have a background in piano and play guitar and bass. Has that been useful as a drummer?

“It’s a blessing and a curse. I’m a multi-instrumentalist drummer. So when I’m playing drums in a band I am the drummer but I am very aware of the other instruments.

“I’m not replacing Slash in a band, but I can understand guitar when we write songs and work on harmonies. There’s the infamous story of me filling in on bass on tour with Slash and the reason that is possible is because I play multiple instruments.

“But to put myself in the pipeline with other drummers and if I was asked to be part of a band, I would hope that a benefit of my musical vocabulary and knowing music a little more on the melody side as well as the rhythm side… I would hope that would be a strong asset.

“I am very respectful of other instruments; I’m not a selfish drummer. The most important thing in a song to me is the two and four, the rhythm and the tempo, and the last thing I care about are the fills that connect the dots between the verses and choruses. I’m a ‘less is more’ person because of my understanding of piano.”

Is there a piece of gear you can’t live without?

“I think all drummers have a snare drum obsession. I have a few that I always lean towards. But I’ve done a lot of sessions in different cities and you don’t always get to have your own snare and kick pedal.

“I have been a fan of the simplest add-on and I have used it live and in the studio and that is the Big Fat Snare Drum. I’m using it on tour now with Slash and I used it on the Living The Dream record.

“In a five-piece rock band I find my favoured tuning is always a little lower and deeper but what happens sometimes is when the snare heads are detuned, you don’t always get that articulation and the crispness of playing a tight snare drum.

“So, I tune the snare up quite high and then add the Big Fat Snare Drum. I can play buzz roles perfectly live and they come out great in the PA and yet you have this snare that sounds deep and fat like on ‘Back In Black’.

“I travel with it and used it with Gene as well. We used a lot of backline kits on the Gene tour where we would do fly dates where we might do two dates in Japan or South America and then into Europe and I didn’t have all of my gear.

“I thought at least if I had the Big Fat Snare Drum even when I was having a tough day I’d have a decent snare, because some days I’d turn up and it’d be a five-inch snare with an Ambassador head on top and I knew I’d play right through the head in the first song.”

How much of a challenge is that to fly in and use completely different gear?

“We have the best of the best with Slash where I have my own drums and we have two sets of gear, so I have an A and B rig. With Gene, it is a backline kit; we request a DW kit but sometimes it doesn’t happen.

“We might play a festival in front of 30,000 people and the drum kit is nothing of my spec. I’m used to one tom and two floors but I changed my spec with Gene – I went with three toms.

“I didn’t fly with cymbals either. I went from all my comforts to having whatever was available that day. But I grew up in the clubs playing bars and I think a lot of keeping it on a simple level and lowering my expectations and in those days not having good monitors, cymbals or drum heads, and understanding the nuance of the gig, helped.

“You can get by with even the crappiest gear, that is my mentality. Some of the volatility of wondering what I would get each day makes it exciting.

“Sometimes the kick drum pedal might look like it has been through a war zone but you just go, ‘Well, this is what I’ve got today,’ and you make it work.”

“I’ve broken kick drum heads in the first song and had the drum tech sit there trying to tape it up for the rest of the set. I’ve blown out snare drum bottom heads on TV shows. If it can happen, it’s happened to me.”