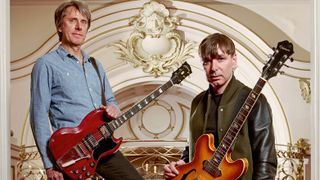 Widely considered the most sonically accurate Beatles tribute in the world, The Analogues are proven masters of their field.

The Netherlands-based group formed in 2014 and chose not to dress up like the original Fab Four, but instead devote all their attention to nailing the actual sonics of each song, using period-correct equipment and additional session musicians to breathe life into music that The Beatles never performed live themselves, following their retirement from the stage in 1966.

On their current tour, the group are performing The White Album in full, along with other choice cuts from the Liverpool legends’ relatively short but highly prolific recording career.

We meet lead player Jac Bico and rhythm guitarist Felix Maginn at London’s Palladium just before soundcheck, where they point out long racks of vintage or custom-shop gear on each wing of the stage, as well as even more rare delights stashed away in endless drawers. For them, the accumulation of knowledge and equipment has very much been a labour of love.

Their hard work has also paid off – the band have sold out arenas in their home country, even landing a six-album deal with Decca – the label who famously refused to sign The Beatles in 1962 – for both covers and original “Beatles-inspired” recordings. Here the pair share the secrets to nailing those British Invasion tones and what they’ve learned from studying the timeless music so closely...

Jac and Felix weigh up the different personalities behind the guitars...

Jac: “I think Paul McCartney was a lot more bluesy and a lot more American-sounding. He knew everything about that style of guitar player. George Harrison was more original and melodic, in my eyes. The way he wrote his solos was influenced by Scotty Moore and people like that. There were a lot of styles and techniques in his solos.”

Felix: “McCartney’s leads on Back In The USSR were quite fast and urgent for the time. It was almost shredding! Jac does all the leads and hard stuff, I do all the Lennon parts. On this album, there are sometimes more than two guitars going at one time so our keyboard player Diederik [Nomden] even plays at times. I really love Lennon’s playing. The great thing about being in this band is we do the older stuff just for fun. If you pick a Rickenbacker 325 with flatwounds and you give it the full welly, that’s the Lennon sound right there. Most of the work is done for you! We take a lot of care in our tones for this band, to the point where it feels like we’re almost like standing in the record... every part feels so distinctive because of the attention to detail.”

How The Beatles forced seventh chords all over their chord progressions...

Felix: “Using 7th chords everywhere might not make sense in all styles of music... but it definitely does in blues. The Beatles grew up on all that stuff, so it was already in their playing. The songs they were learning were all bluesy and 7th chord-based, that’s all they knew to begin with, and they kept it.”

Jac: “If you listen to She’s A Woman, that’s got quite a hard 7th chord that uses the pinky... but once you master that, you can move it around. Similarly, there are other songs where Lennon uses only a 7th chord, moving the same shape up and down... it’s never quite major or minor.”

A look at the more challenging aspects of playing in The Analogues...

Felix: “When we did the Sgt. Pepper’s... album, that was quite a challenge. It had that whole Indian thing going on, with sitars and tablas. It sounded fantastic. Jac used a real sitar...”

Jac: “They’re very hard to play. I had some lessons years ago and picked it up again for that tour. On this [White Album] tour, the most difficult song is Happiness Is A Warm Gun. There are a lot of changes in that, it goes from 4/4 to 3/4 and then switches back, with lots of singing and harmonies. It might seem easy enough doing everything separately, but doing all of it at the same time can be a challenge... if the rhythms feel different, things can get really fucked up. You have to learn it note-by-note, bar-by-bar, to get it right but it’s perfectly possible.”

The fab four approach to songcraft and melody...

Felix: “A lot of the Lennon songs are unusual. I Am The Walrus just goes round and round in only major chords... he didn’t really know as much musically. McCartney was a lot more traditional, while in contrast Lennon was quite punk in ways. But his lyrics were incredibly clever. My guess is he always knew how good McCartney was at writing songs and figured out how to make those songs even smarter. He’d come up with things that would make you go, ‘What does he mean by that?’. He’d move and throw things off-centre to give them that extra edge.”

Jac: “People talk about Lennon and McCartney a lot, but Harrison was brilliant too. He wrote While My Guitar Gently Weeps. He developed a lot as a writer on the White Album and even more on the album that followed.”

Felix: “Savoy Truffle is another song of his that I love, which is off the White Album. It has these doubled baritones... it’s almost glam rock, ha ha!”

Jac: “To play like The Beatles, you need to follow no rules and go everywhere. A&R managers always told bands to play more songs like their hit single and stick to that one sound, staying clear about their style. I always hated that. I prefer being diverse. The Beatles just did what they want; you can hear the styles changing through each album. On Sgt. Pepper’s... they go from She’s Leaving Home to Being For The Benefit Of Mr. Kite!, then from Within You Without You into something vaudevillian like When I’m Sixty-Four.”

Felix: “In the 60s, they also had an advantage. Not to take anything away from them, but they had room to take it further - they were smart enough to come up with something new and different. Even if it was a basic blues song, they’d be able to get to the idea behind it. There were no limitations, they didn’t give a shit about that.”

How becoming more of a studio band had great consequences on their music...

Felix: “When The Beatles stopped playing live, they realised they had more opportunities and instruments available in the studio. It didn’t have to be live anymore; it became more of an experiment. We’ve listened very carefully to figure out what exact instruments were used for what parts and can hear where Harrison used an SG or when McCartney switched to a Hofner bass. There are even some songs where you can hear it’s a different guitar on the same track! At this point of their career, they were very edited, with lots of cut and paste, so quite often things like that would happen. They never wanted to repeat themselves... a lot of bands say that, but it always sounds like the same album again from them.

“Dear Prudence is such an exquisite song - it’s almost progressive. The latter years had more weight in terms of songwriting. They had been through a lot and ended up pouring all their emotions out through the music. On the White Album, you can hear that. They worked separately to work on these very personal songs... it’s pretty clear where they are coming from. They weren’t pulling any punches. It wasn’t my favourite Beatles album, but playing it on this tour, I look at it in a completely different light. Even the shitty songs sound good, ha ha! You can appreciate them for what they are.”

Jac: “They were together for such a short period of time. The development they went through in those seven years of releasing music was actually quite incredible, particularly when they stayed in the studio. There’s a book by Andy Babiuk which lists all the gear the band used, so it’s not so much a secret anymore, but there is definitely some madness in how they worked! They would do things like feed the guitar through a Leslie speaker or plug it straight into the desk and overdrive the actual desk. That’s how they got that mean and dirty sound in Revolution... and funnily enough those approaches were exactly that: revolutionary.”

A day in the life

The equipment seen on stage for this White Album tour...

Behind the Epiphone instrument at the heart of The Beatles’ sound throughout the years...

Jac: “Lennon, McCartney and Harrison all played Casinos. I’ll use these guitars for Helter Skelter, Honey Pie, Revolution... not too much because George also used SGs and Les Pauls. So that’s why I have an original ’65 SG, a Custom Shop SG reissue and two R7 Les Pauls - one of which I won off Greg Lake after a game of poker!”

Felix: “My side of the stage is pretty much Casino heaven. They are without a doubt the best guitars ever made. They have that nice open ring but also enough punch to give you that little bit of overdrive. It still has an acoustic flavour to it, which I love. My orange one is from 1965 or 1966, we’re not sure which, and I also have a Japanese Casino in wine red from the early 80s. It’s a great guitar, with more output than the others... like an SG but more open. I use it for Dear Prudence and Rocky Raccoon.”

A shot of rhythm and blues

The amplifiers used on this run...

Felix: “I run my Bandmaster on a break because they are so loud. Even just the Casino going straight in with nothing in between, it’s on! You don’t have to do anything. It’s great if you play really dynamically... everything you put into the guitar comes out. I like that. Using your right hand to drive the amp and make it work a little more in places. You can always rely on Fender amps to be very direct.”

Jac: “I use an all-original, 69 or 70 Twin Reverb, with no master volume. These were only made during those years and sound incredible. Wealsohaveone spare each at the back too.”

And your bird can sing

A run through The Analogues’ main acoustic guitars...

Jac: “My main acoustic is not a vintage model, but an Epiphone Masterbilt reissue which sounds really good amplified, which is mainly why I use it. Plus Felix has a Martin D28 which is more period-correct, but they kept using Epiphone acoustics throughout the years. It’ll get used on Wild Honey Pie, The Continuing Story Of Bungalow Bill, Rocky Raccoon, Mother Nature’s Son, I Will, Julia... quite a few!”

Felix: “My main acoustic is a Martin D28, which is probably around 10 years old. Obviously I’d like to have one from 1964 but the price is quite shocking!”

Jac: “I like having a lot of colours, especially when it comes to overdrives and fuzzes. I like the EWS Fuzzy Drive and use a Diamond Compressor in front of everything. I also run a Fulltone Full-Drive and OCD, J. Rockett Audio Blue Note OD, HBE Germania Treble Booster, plus this dual 808 that my tech built... We’ll use the Strymon Mobius for modulation, maybe something like a flanger. The Strymon Deco is great too, it adds this effect of double-tracking. The Beatles did a lot of that, so this brings a slapback with some modulation on it too.”