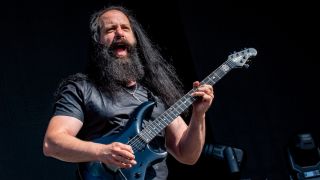 It is fair to say that the extremes that have come to define and dominate the world stage in 2019 have offered fertile inspiration for those operating at music’s outer reaches.

The progressive guitarist has never felt so unplaceable and diverse and while prog metal is a recurring theme in this year’s list, the variety among these 10 players is remarkable. A vintage year? Perhaps…

JP placed second in this poll last year without even releasing a record, so it makes sense that in the year Dream Theater’s much-lauded 14th studio album Distance Over Time landed, Petrucci should claim the crown.

The near-athletic drive and technicality that has set Petrucci apart from the crowd remains the backbone of his playing but his group’s latest opus showcased a newly sharpened focus – an ability to cover more distance in less time.

Manuel Gardner Fernandes has repeatedly been hailed as one of progressive playing’s most-promising stars-in-the-making and has amassed a deserved and dedicated following, both with his band, Unprocessed, and via Instagram.

His moment of the year though was in the raw live footage he posted in response to the somewhat conspiratorial accusations that he allegedly sped up his videos.

Opeth’s Åkerfeldt and Åkesson are rarely absent from any list of the world’s best progressive guitarists. This year they returned with In Cauda Venenum, their 13th studio album, which they released in both English and Swedish and subsequently wowed critics and fans alike.

Few players have done more in recent years to redefine and further the cause of progressive guitar music. 2019 has felt like a year of consolidation for the Australian guitarist, with sizeable globe-trotting tour dates across the US, UK, Europe and Asia.

In his 47 years upon this rock, Devin Townsend has somehow released some 23 studio albums. This year’s Empath deftly wove together diverse threads from his multiple recent projects, all meaning Townsend’s name has once been again whispered in alternately hushed reverence and hooted astonishment in venues across the globe.

2019 has been a breakthrough year for New Jersey progsters Thank You Scientist due in no small part to the psychedelic brilliance of their colourful third album Terraformer.

Guitarist Tom Monda is the group’s musical lynchpin, pushing and pulling the band’s seamless shifts in time and musical landscape.

The crown princes of contemporary progressive metal, Periphery’s heavy juggernaut has continued to rapidly gather pace over the last year.

You might know Jakub as the guitarist of Polish prog rockers DispersE, but his second solo outing Nothing Lasts, Nothing’s Lost, released earlier this year represents his most exciting work.

It combines ambient soundscapes, reworks progressive playing techniques and even weaves the vicious licks of Meshuggah’s Fredrik Thordendal into the melodic Creature Comfort.

Felix Martin’s blend of Venezuelan folk technique and tapped melodic metal has to be seen to be believed.

His unique double-neck playing style, utilising 14- and 16-string instruments yields a sound that is unlike any other. And how many of us can say that in 2019?

Young is an inspiring, math-y player, who’s sound seems to chime and cascade, melding fleeting fast runs and hypnotic ambience. Her band, Covet, have had a deservedly good year, including a headline tour and dates with Periphery.

In the opening months of 2020 they’ll link-up with Periphery once again, alongside Plini - an awe-inspiring progressive line-up if we ever saw it.