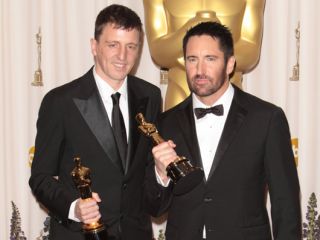 Trent Reznor and Atticus Ross have won the Best Original Score Oscar for the brooding soundtrack that they created for David Fincher's The Social Network.

In doing so, they saw off competition from Alexandre Desplat (The King's Speech), Danny Elfman (Alice in Wonderland), A.R. Rahman (127 Hours) and Hans Zimmer (Inception).

Former Nine Inch Nails leader Reznor and his English co-creator Ross admitted to being stunned to receive the award, with Reznor describing the process of creating the score as "the best experience I've ever had from start to finish".

Discussing Fincher's vision when he asked them to create The Social Network's score, Reznor told reporters: "The only immediate direction he gave us was that there be no orchestra, be similar to Blade Runner - inhabit the same iconic quality - not sound dated. It was definitely difficult to score for a bunch of people talking in rooms. There were no landscapes, or battles scenes. It wasn't obvious to us what shape it would have."

Reznor also revealed that Oscar rival Hans Zimmer had told him: "In a lot of ways, I hope you win because it's helped open up the field a bit for texture of what film scores can be."

The duo's next project is the score for Fincher's remake of The Girl With The Dragon Tattoo.

(Via The Hollywood Reporter)