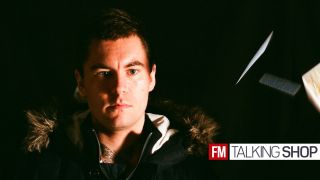 As a solo musician and a member of bands Ghosting Season and worriedaboutsatan, Mancunian producer Tom Ragsdale, aka Winter Son, has spent much of the past half-decade exploring the space between club-focussed Techno and the more ambient realms of instrumental music.

With a collaborative EP with Sankeys resident Josef K out now, and an album from worriedaboutsatan due next month, FM caught up with Ragsdale to talks synths, guitar riffs and dodgy IT shops...

"I grew up on a rich diet of ska punk, metal and classical guitar grades, so the idea of making music with anything but a six stringed instrument was totally alien to me up until I was about 17! When I started college my tutor gave me a bag of CDs that I delved into and became obsessed with (it was Aphex, Boards Of Canada and Autechre) and he started telling me about synths, sound modules and sampling.

"It opened up a whole new world for me and I got myself a copy of Acid Pro 2 and some techno loops from a REALLY dodgy IT shop on the top deck of the Princess Quay Shopping Centre in Hull. What came next was some of the most embarrassing 'chill out' music you'd ever be subjected to, but it got me into making beats. I was making music on the family computer in the kitchen with a pair of PC speakers trying to emulate Aphex's Didgeridoo and Autechre's VLetrmx21 to not a lot of success, and very slowly it began to take over my life."

"It's changed a lot since the early days! I now have a room in my flat were everything is nicely set out for me. I have quite a lot of equipment, so I need a big area! I do a lot of composing for a lot of people and clients outside of making Techno, so I need a variety of sound sources (and it's also a great way to justify my spending!)

"I use a lot of hardware, but I do love plugins too, it totally depends on what I want to create that helps me to decide what to use. I've scored a few films these past few years, and for that I would use plugins mainly as the sheer amount of different sounds to discover is infinite. My hardware is used more for 'classic sounding' music, like House and Techno, and it's also amazing fun to jam around on.

"I come from a background and family of instrument playing, so I love having equipment to play with. I absolutely love Reaktor though and it's saved my ass so many times when writing for films and TV. I have a legit copy, but I feel I owe NI so much money! I play live with an 808 and sometimes a 909 and these form the basis of my drum sounds as their sound palettes are so strong. My Juno 106 and 60 are monsters for bass and arps an"d they're amazing for anyone making electronic music, they can produce any sound you can dream of.

"I have some bizarre pieces of kit too - I have a Roland SH1000 (the first ever Roland synth, I think) and a Logan String Melody, which produces the most haunting string sounds ever. I got them both for £100 on Gumtree from a guy who was being forced to sell them by his wife. Shame."

"I use Ableton every day. I used to use Reason when I started making 'serious' electronic music, but I moved to Ableton in about 2008. A lot of people give it abuse and say you can't do certain tasks on it (composing for film etc), but I've done everything on it! Everything I hate about it I love about it too! The plugins are also very 'plain', which I like as I don't want to colour a lot of the sounds I use, I want them raw and untouched. It also has the amazing live performance side too, which I use at gigs."

"Definitely the Juno 60. I could take away everything else tomorrow, but I'd be very upset without a Juno. I'd take it to a desert island if I had to. I find it very simple to use yet it always produces some fantastic sounds. It always surprises me how something with minimal controls can give out textures and timbres from across the board."

"I got a Moogerfooger pedal a few months ago and that's been so much fun to use with synths, although I think it's more for guitars. It's basically a hyper sensitive filter with a lovely warm drive. I was thinking how I could change my synths with crazy external effects, and I started reading about the Moog pedals. Being a guitarist I've always loved stompboxes and unusual pedals, so I thought I'd jump in and see what happens with one. I've just thought that I should try it on drums too, that could be evil…"

"Ugh, one of those Yamaha CS-80s! I've seen one in the flesh and I nearly nicked it! It was in a synth repair shop and I had to give the guy a helping hand lifting it up onto his work desk, those things are very heavy, like, 150lbs!? I have the plugin from Arturia and it slays! I've used that quite a bit, and I don't think I'll ever have chance to play on an original unless someone uses one of my tracks as the theme tune for The X Factor!"

"I like to jam around, so for me I'd think of a very simple idea and then kick things off. It could be something simple like a rhythm pattern or a sequence of two really nice chords. Or maybe even just making a soundscape from drenching one note in 100% reverb. It helps to keep focus if you have sounds constantly running and then slowly build upon them like a band would.

"I'm not really into making music using coloured blocks on screen and copy-pasting, it feels artificial working like that. I give myself small boundaries too, like a brief, and that helps me to decide where to take the music. I usually record jam session as one long track and then listen back so I can pick what I like out and then go back and quickly punch in the parts. I want there to be a certain 'energy' in the studio that I want to reflect in the music."

"I've just finished a bunch of tracks with my buddy Jozef K, who I collaborate with a lot, and we're currently getting a few EPs ready for release in the coming months. We have very different influences, but they come together really nicely and compliment each other. One of my bands, worriedaboutsatan, is putting out an album in March too, so we're currently getting our live set sorted and fighting over who plays which cool synth parts! "

"I think the most important part of the music making 'process' (sorry, horrible word, I know!) is those initial 30mins when you're getting a feel for the studio and what's flowing that day. I always hit the record but straight away and see if I can capture something totally random or spur of the moment that I might play or set off with the machines. There have been way too many times when I've found that killer bass riff and then lost it when my focus has drifted off! So hit record, start playing and see what comes out."

"What I mean is, use instruments and sounds that aren't necessarily associated with the kind of music you're writing in. I use my guitar a lot in techno tracks and not only is it a lot of fun, it gives a texture that's not heard a lot in that style. I don't play blues riffs are anything like that, but just a few notes with some atmosphere can change the feel of a track. Vocals a lovely too, even just some breathing or whispering can do a lot to the music. It also gives the music a sense of depth as you're adding sounds that are taken from different locations and recording methods. It's all good fun!"

Listen to a lot of music from lots of genres

"I couldn't imagine making House music and only listening to House music, there'd be no inspiration to carry on! The best ideas come from experimenting and blending different ways of writing music, and you can come out with some amazing results. You don't have to take specific sounds from one genre and apply them to another, it could just being using a certain rhythm pattern from Flamenco (as an example) and using that as your bass drum pattern in Techno. You can hear artists like Shackleton and Perc are listening to a massive variety of music and it shows within their music."