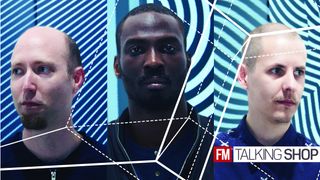 This month London duo LV (aka Will Horrocks and Simon Williams) release their third full length LP, Islands, which once again sees the producers uniting with vocalist Joshua Idehen (pictured centre), with whom they released their acclaimed debut, Routes, back in 2011.

Once again the collabortation has produced impressive results; the album is another tight mix of smart lyricism and eclectic, club-inspired beats. To mark the release, FM caught up with the duo to find out more about their approach to production.

FM: When did you start making music, and how did you get into it?

Simon: "We started making music together in 2000, Will had a MPC2000 and I had a bass guitar. We soon got hold of a copy of Logic (version 4) and that was a revelation When we started we were inspired from a production point of view by people like Kruder & Dorfmeister and Jazzanova, Drum 'n' Bass producers like Ed Rush & Optical and Bad Company, as well as Hip Hop drum programming.

"When we started producing it seemed like a new technique to process sounds was being invented every day and it was fun to try and work out how to jet-plane a bass noise or layer up drums properly."

"We've been making music in a room in Will's house for many years now. It's a great space, really light and undisturbed but we're leaving it soon for a separate rented studio space. Most of the processing is done with plugins but we use a lot of hardware synths. It's nice to have that hands on connection when you're working on a synth. We use a couple of MFB desktop synths, the Moog Miniatur and Korg Volca at the moment.

"The only bugbear is that we can't have everything plugged in at the same time due to a lack of inputs on the sound card, it would be great to have everything just ready to go at any time. Hopefully we'll achieve that in the next place."

"Logic. It was what a friend used when we started producing and he was a big help in getting us started. Now It just seems natural to us."

"The computer - it is the hub of the studio!"

"Will put together a stripped down drum kit recently - a kick drum, snare and hi-hat. That has been really fun to use and we've got a lot of good results from recording it. It's all over our latest album. Playing in a break, processing it and then resampling and chopping it up is a really satisfying process."

"There are so many! Maybe an ARP2600 or a Roland Jupiter or a Korg Mono/Poly."

"There are many ways to start off a track, it's good to vary the creative process so it doesn't get stale. Sometimes we'll start by making drum sounds on our synths and then bash out a beat. Sometimes we'll record a chord sequence on the Rhodes. It doesn't really matter as long as noise is being made so you can keep adding layers to the production. Often the first element of a production doesn't make it through to the finished track."

"We have an album coming out on Keysound with Josh Idehen called Islands. We're also going to Morocco in late September to produce an album with a group called The Fawda Trio."

"…and try not to ruin them. Seems obvious, but it's easier to get things right as you write than do a lot of remedial work later."

"Almost every bass sound can be improved with a bit of distortion. It also buys you a bit of headroom. NB: Do not over use. (Unless you want to)."

Don't pay too much attention to other people's production techniques

"If you like the sound of it then keep it. Get to know your set-up and remember to listen."