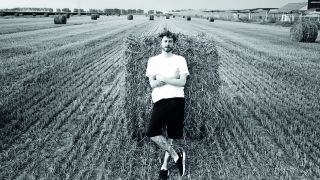 To round off 2015, Future Music caught up with a selection of our favourite producers and DJs. See more in issue 300 of Future Music, which is on sale now...

The past 12 months have seen New York producer Drew Lustman pushing boundaries on two fronts: continuing to release subtle House and Techno singles under his regular alias, while displaying his Jungle influences with a debut LP under his own name, The Crystal Cowboy.

How did your creative process differ between this year's LP as Drew Lustman and your FaltyDL work?

"Creatively it felt like the stakes weren't quite as high with an album under my own name for some reason. Funny, it should almost be the opposite. FaltyDL has been around for a moment now and I can't make or release anything without all of this loaded thought involved: placement, features, press. So it's sort of these mental barriers that get imposed - most often by myself - and I imagine it's a similar process for all artists. Without all of that crap floating around in my head, an album under my name sounded pretty easy. It was made in about two weeks; FaltyDL albums take months."

Tell us about your studio...

"I work from home in a studio that is not my bedroom, nor my kitchen. So that's nice. I'm pretty much 'in the box' as they say - relying mostly on my computer and software. It changes depending on the tune, but most often I write in this piece of outdated software, Reason 5.

"I would like to see the entire set-up change drastically this winter/next spring: new computer, new software, a synth or two. I think it's every artist's responsibility to challenge themselves. My challenge will be getting out of my comfort sound and producing with new perimeters. We shall see though..."

What one piece of gear in your studio could you currently not do without, and why?

When creating an album, where do you start?

"I start without the music; there's no great looming idea or vibe until I discover it, which comes from an intense writing period, say 5-10 hours a day for two weeks. Then I see what works, what's exciting (if anything) from this new batch? I have no business thinking about anything other than not thinking at all and letting the music flow out of me. After that I can think about what might make sense on a release. It's helpful working with labels with strong A&Rs; that can help mould the finished product, but it's mostly the responsibility of the artist."

Two new LPs - one FaltyDL and one under a pseudonym. Both will hopefully surface next year, possibly 2017 if things don't go well for the boy here."

"My producer tip is to not listen to anyone else. I can't tell you how many demos I get that sound very bland or like whatever the current trend is. Pretend you are an alien from another planet and you don't speak our musical language and you need to transmit your ideas in a way that we will understand but will also show us a new path or a new idea. Also, sit with your music. I often make something and think its great only to decide one week later that it's not so great. Let it gestate. Good luck!"