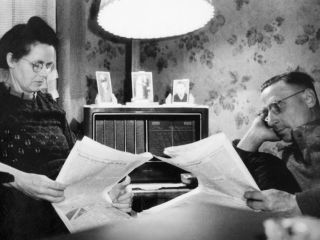 "What's this called dear?" "I don't know, but it sounds just like the last one." (Image credit: DaZo Vintage Stock Photos/Images.com/Corbis)

If you're a more mature musician who's often heard to moan that all of today's pop songs sound the same, it seems that you may now have some support from our old friend 'science'.

According to Reuters, researchers in Spain have been using The Million Song Dataset, which can analyse audio and lyrical content, to compare pop songs that were released between 1955 and 2010.

Their results are said to show that while songs have become intrinsically louder - a development that's been dubbed the loudness war - there's less variation when it comes to the chords, melodies and types of sound that they contain.

Speaking to Reuters, researcher Joan Serra said: "We found evidence of a progressive homogenization of the musical discourse. In particular, we obtained numerical indicators that the diversity of transitions between note combinations - roughly speaking chords plus melodies - has consistently diminished in the last 50 years."

All of which might feel rather depressing if you're a songwriter - if you want to make music that's popular, are you better off copying someone else's style than you are coming up with your own? Let's hope not.