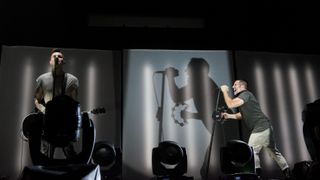 Industrial rock stalwarts Nine Inch Nails' new album Hesitation Marks is due for release next week. Last night band leader Trent Reznor revealed that, alongside the standard version of the record, an alternatively mastered 'Audiophile Version' would be available aimed specifically at those listening on higher-quality audio gear.

In a lengthy post on the band's Tumblr, the record's producer Alan Moulder explained the decision to release two versions, which stem back to issues at the centre of the much-debated 'loudness wars' - the loss of dynamics and low-end fidelity in music due to increasing pressure to match the volume of modern releases.

In the post, Moulder states: "The biggest issue in mastering these days tends to be how loud can you make your record. It is a fact that when listening back-to-back, loud records will come across more impressively, although in the long run what you sacrifice for that level can be quality and fidelity. So after much discussion we decided to go with two versions.

"On the main release Tom [Baker - mastering engineer] did exceptional work to maintain the integrity of our mixes and reproduce the low end as much as possible and still get a decent level, although it's still nowhere as loud as a lot of modern records.

"The Audiophile Mastered Version is more true to how the mixes sounded to us in the studio when we were working on the songs. Have a listen, turn up the volume and enjoy the experience!"

Baker himself adds: "The standard version is "loud" and more aggressive and has more of a bite or edge to the sound with a tighter low end.

"The Audiophile Mastered Version highlights the mixes as they are without compromising the dynamics and low end, and not being concerned about how "loud" the album would be. The goal was to simply allow the mixes to retain the spatial relationship between instruments and the robust, grandiose sound."

In the same post, however, the band are quick to assure listeners that the standard edition is by no means of an inferior quality, and that the vinyl edition of the LP has been mastered specifically for that format.

The Audiophile version will be free to download in MP3, FLAC, Apple Lossless and WAV formats for anyone who buys the album from nin.com when it's released 3 Sept.